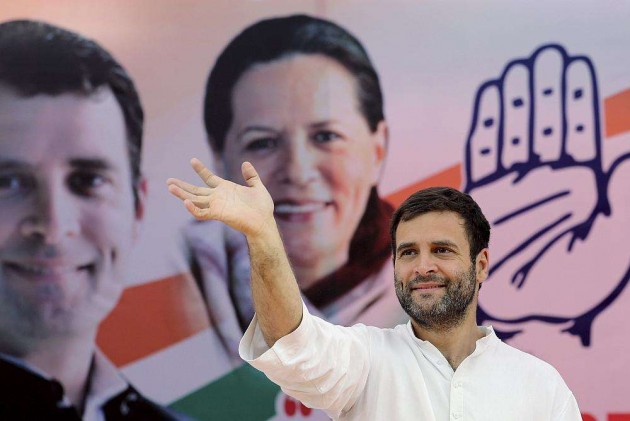 Party sources said 35 per cent of the candidates are under the age of 50.

Sonia and Rahul will seek re-election from Rae Bareli and Amethi.

Among the union ministers figuring in the list are Sushilumar Shinde from Sholapur in Maharastra, Salman Khurshid from Farrukhabad, Sriprakash Jaiswal from Kanpur, Beni Prasad Verma from Gonda, (all in Uttar Prdesh), Kamal Nath from Chhindwara and Jyotiraditya Scindia from Guna in Madhya Pradesh, Adhir Ranjan Chowdhary from Behrampur (West Bengal), Parneet Kaur from Patiala (Punjab), Girija Vyas from Chittorgarh (Rajasthan), K H Muniyappa from Kolar and Mallikarjun Kharge from Gulbarga, (Karnataka).

Lok Sabha Speaker Meira Kumar has been renominated from Sasaram and former IPS officer Nikhil Kumar, who resigned as Kerala Governor just two days ago, was fielded from Aurangabad in Bihar, from where Congress has declared candidates for 10 of the 12 seats it got in alliance with Lalu Prasad's RJD.

Mohd Kaif is Congress' candidate from Phulpur, a constituency in Uttar Pradesh once represented by Jawaharlal Nehru, Karuna Shukla is the nominee from Bilaspur in Chhattisgarh while justice Hanumanthappa from Bellary in Karnataka. (more)

from Sabarkantha, Union Minister Bharatbhai Solanki from Anand and Tushar Chaudhary from Bardoli while party general secretaries Mukul Wasnik, Gurudas Kamat, AICC Secretary Priya Dutt are among those renominated from their respective seats in Maharashtra.

This is for the first time in several years that Congress has finalized so many candidates for general elections soon after announcment of the poll schedule.

Bhausaheb Walchaure, a sitting member of Shiv Sena from Shirdi in Maharashtra who joined Congress last month, has been fielded by the party from the same seat.

The party has reposed its faith in seven-time MP Vilas Muttemwar after some initial dithering to take on former BJP chief Nitin Gadkari from Nagpur in Maharashtra.

Amita Singh, wife of outgoing MP from Sultanpur Sanjay Singh, has been fielded from the seat. Sanjay Singh was recently brought to Rajya Sabha from Assam after reports of his warming up to BJP.

A K Antony committe had recommended early candidate selection so as to give time to the nominees to campaign for the polls.