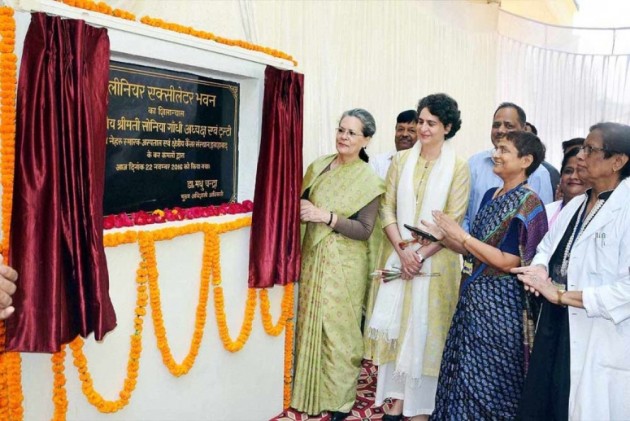 A day after attending a function commemorating the birth centenary of Indira Gandhi in Allahabad, Congress president Sonia Gandhi and her daughter Priyanka Vadra met local party leaders, enjoyed a stroll at the sprawling Anand Bhavan premises and visited the Kamla Nehru Hospital before returning to New Delhi.

"This was the first occasion in more than a decade when Sonia and Priyanka were together at the Swaraj Bhavan. The last time they had spent the night at their ancestral house was during the campaign for 2002 Assembly elections in Uttar Pradesh," UPCC spokesman Kishore Varshney said.

On Monday, they were joined by Rahul Gandhi during the inauguration of the photo exhibition organised by the Indira Gandhi Memorial Trust. The party vice-president left last night.

"For Congress supporters, yesterday was a memorable occasion as it was for the first time when mother, son and daughter were together at their ancestral house," Varshney said.

He, however, added that they (Sonia, Rahul and Priyanka) had also come to Anand Bhavan way back in 1991 when they were carrying the ashes of Rajiv Gandhi. "However, that was an occasion marked by grief and hence we do not wish to count that."

On Tuesday morning, Sonia and Priyanka went to the Kamla Nehru Hospital –- which is governed by a trust headed by the Congress president herself.

Sonia inaugurated a blood bank there and interacted with a group of nurses who had completed their training recently.

"Thereafter, they returned to Anand Bhavan, enjoyed a stroll on its sprawling lawns and interacted with the staff there," Varshney said.

"Sonia and Priyanka heard their grievances and offered advice besides exhorting them to work hard for improving the party's position in the upcoming assembly elections in the state," the UPCC spokesman said.