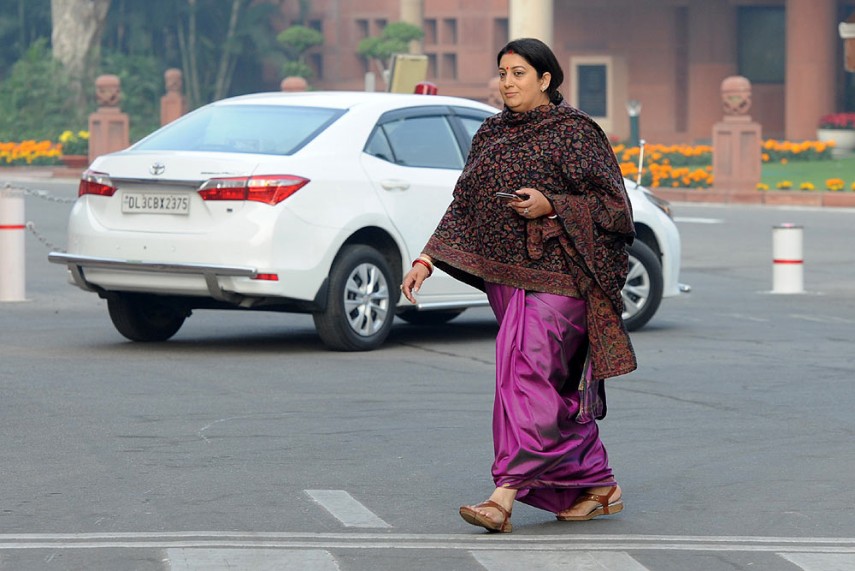 Amid the row over her educational qualification, Union Minister Smriti Irani had asked the Delhi University not to disclose it to an RTI applicant, the School of Open Learning has told the Central Information Commission.

The Commission has now directed the School of Open Learning (SoL) to produce before it all the records related to educational details of Irani, Union Textile Minister.

A fresh show cause notice has been issued to the Central Public Information Officer of DU for having failed to produce the records before the Commission as directed.

Irani's degrees have been caught in a row after a petitioner alleged she had given contradictory information in her affidavits filed before contesting elections in 2004, 2011 and 2014.

In her affidavit for April, 2004 Lok Sabha polls, Irani had said she completed her BA in 1996 from DU (School of Correspondence as SoL was then called), whereas in another affidavit of July 11, 2011 to contest Rajya Sabha election from Gujarat, she said her highest educational qualification was B.Com Part I, a petitioner had alleged in a city court.

The matter was dismissed by the court on the ground that considerable time had lapsed in filing the complaint.

The issue is, however, still alive before the Central Information Commission where an applicant had filed an appeal, saying he was not given information about Irani's educational qualification by the SoL.

During a hearing, SoL's Central Public Information Officer O P Tanwar said considering that it was a third party information he had consulted Irani about the disclosure.

"In her response (she) raised objection against (sic) disclosure and requested the public authority not to reveal her educational qualification. The CPIO pleaded that information sought was given by the former HRD Minister in fiduciary capacity and hence could not be divulged as per Section 8(1)(e)," Information Commissioner Sridhar Acharyulu said in his order. More Although Chief Information Commissioner R K Mathur has

divested Acharyulu of the Human Resource Development Ministry portfolio, two days after he ordered disclosure of records of the degree course of BA, 1978, the year in which Prime Minister Narendra Modi is said to have passed from Delhi University, he will continue to adjudicate matters in which he has already issued notices and is finalising orders.

The petitioner had sought to know from the School of Open Learning whether the Minister had obtained BA degree in 1996 and passed B Com Part I in 1994 from Delhi University.

He had also asked for photocopies of her hall ticket and mark sheets, besides admission form with enrollment number, in case she enrolled herself for the course but did not obtain the degree.

The petitioner sought to know if the Union Minister was enrolled with the University in 2013 why did she not take any examination.

The SoL cited two exemption clauses--personal information and fiduciary information-- under the RTI Act to deny the information.

The petitioner filed a complaint and asked the CIC to institute an inquiry into "unjustifiable and illegal" denial of information sought by him.

He said to find answers it was necessary to verify the records.

"The Commission summons the concerned records and directs O P Tanwar to produce registers and records containing details of educational qualifications accorded to the student which were sought by the applicant," the Information Commissioner had said in his order.

He also asked SoL as to in how many cases it has refused to give degree related information under the RTI Act in the year 2016.

The the transparency panel had yesterday directed the Central Board of Secondary Examination to allow inspection of class 10th and 12th school Irani, rejecting CBSE's contention that it constituted "personal information".