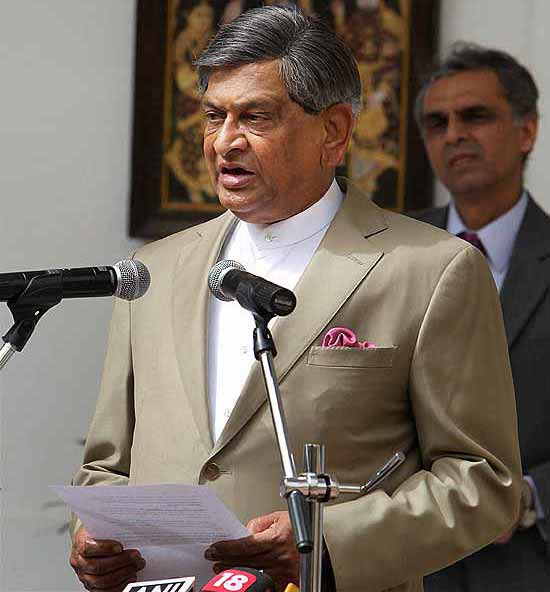 outlookindia.com
-0001-11-30T00:00:00+0553
The countdown for a substantial reshuffle of the Union Council of Ministers began today with resignation of External Affairs Minister S M Krishna and reported offers by Ambika Soni and Mukul Wasnik to quit the government in favour of party work.

The reshuffle, which will take place on Sunday morning, is expected to see induction of new faces, including actor-turned-politician Chiranjeevi.

80-year-old Krishna, a former Chief Minister of Karnataka, sent his resignation to Prime Minister Manmohan Singh after apparently being told of plans to revamp the Cabinet. It has since been accepted.

Krishna, who was surprisingly made the External Affairs Minister after 2009 elections, said he was stepping down to pave the way for youngsters and strengthen the hands of leadership for strengthening the party.

There were indications that he could be asked to lead the Congress in Karnataka where assembly polls are due next year.

Late in the night, reports emerged that Information and Broadcasting Minister Ambika Soni and Social Justice Minister Mukul Wasnik also had offered to quit to work for the party.

Whether Rahul Gandhi would join the government is still a matter of conjecture even as the Prime Minister held consultations with Congress President Sonia Gandhi for about an hour, apparently to give final touches to the exercise.

Some more Ministers are likely to quit ahead of the reshuffle, which could be the last before the Lok Sabha elections slated for 2014.

Among the probables for induction are Chiranjeevi, whose 18 MLAs provide stability to the Congress government in Andhra Pradesh after the merger of his party PRP.

Speculation is that former Chief Minister K Vijay Bhaskar Reddy's son Surya Prakash and two MPs from Telengana region are likely to be made union ministers.

From West Bengal, where ally Trinamool Congress quit the UPA two months back, Congress MPs A H Khan Chowdhury, brother of late Ghani Khan Chowdhury, PCC President Pradeep Bhattacharya and Deepa Dasmunsi are among those being said to be considered for induction.

Trinamool had six ministers in the Council of Ministers, including one at the Cabinet level.

The possible names of the successors in the External Affairs Ministry include Commerce Minister Anand Sharma.

The other changes could include ministers holding dual portfolio shedding one of their responsibilities.

Younger ministers like Sachin Pilot, Milind Deora and Jyotiraditya Scindia are likely to be upgraded.

There have been berths vacated by DMK representatives A Raja and Dayanidhi Maran in the last two years after their names cropped in the 2G scam. However, DMK President M Karunanidhi had recently made clear that his party will not not like to reclaim their lost berths.

Yesterday also Minister of State in the PMO V Narayanasamy met Karunanidhi at his residence in Chennai when DMK leader is believed to have stuck to his position.

There is speculation that some young faces, considered close to Rahul, like Manicka Tagore and Meenakshi Natarajan could be inducted into the council of ministers.

With the death of Vilasrao Deshmukh, there is a vacancy for a cabinet minister from Maharashtra.