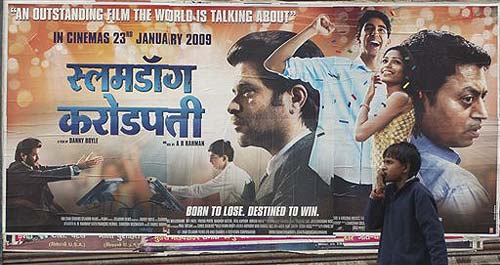 Continuing his spectacular run, A R Rahman has become the first Indian to get three Oscar nominations for his score in British-Indian movie Slumdog Millionaire, which was also was nominated for seven other categories including 'Best Film' and 'Best Director'.

Close on the heels of the dual-language film winning four Golden Globes, including one for Rahman, earlier this month, Danny Boyle and Simon Beaufoy were shortlisted for best director and best adapted screenplay categories.

The nominations were announced at the Academy of Motion Picture Arts and Sciences' Samuel Goldwyn Theatre by Oscar-winning actor Forest Whitaker. The awards will be announced on February 22 at Hollywood's Kodak Theatre.

This is the first time that an Indian has won more than one nomination in Oscar history.

Reacting to the nominations, Rahman said: "I did not think it will get there. God has been really kind. And I have to really thank the prayers of all the people and their good wishes.

"Something good is happening and I am really happy about it," he said, adding there is a kind of optimism in the film and so much of positive vibes as you leave the movie hall."

Co-director Loveelyn Tandon said "We have proved everyone wrong. It's a crazy feeling beyond words. Ten nominations is something unbelievable."

She said all Rahman's work has been awarded and the "world has finally woken up to his talent".

Rahman will compete with Peter Gabriel and Thomas Newman (Down to earth from WALL-E) in the original song category. Gulzar has penned the lyrics of Jai Ho and Maya Arulpragasam O Saya.

No Hindi movie has ever won an Oscar. There have been entries from time to time though.

The three Indian movies nominated for an Oscar in the foreign language category were: Mother India (1957), Salaam Bombay! (1988) and Lagaan (2001).

Shwaas (2004) was submitted by India with 49 other movies from different countries but did not make the final cut.

The films for the best picture race are Milk, Frost/Nixon, The Curious Case of Benjamin Button and The Reader.

Those nominated in the best director category along with Boyle are David Fincher (The Curious Case of Benjamin Button), Stephen Daldry (The Reader), Gus Van Sant (Milk) and Ron Howard (Frost/Nixon).

Following is a list of the 81st Annual Academy Awards nominations for 2009:

Best Documentary Feature:
The Betrayal (Nerakhoon), Encounters at the End of the World, The Garden, Man on Wire, Trouble the Water.

Best Documentary (short subject):
The Conscience of Nhem En, The Final Inch, Smile Pinki, The Witness - From the Balcony of Room 306.

Also See: All It Boyles Down To, 'I Knew The Film Would Be Different', Oscars