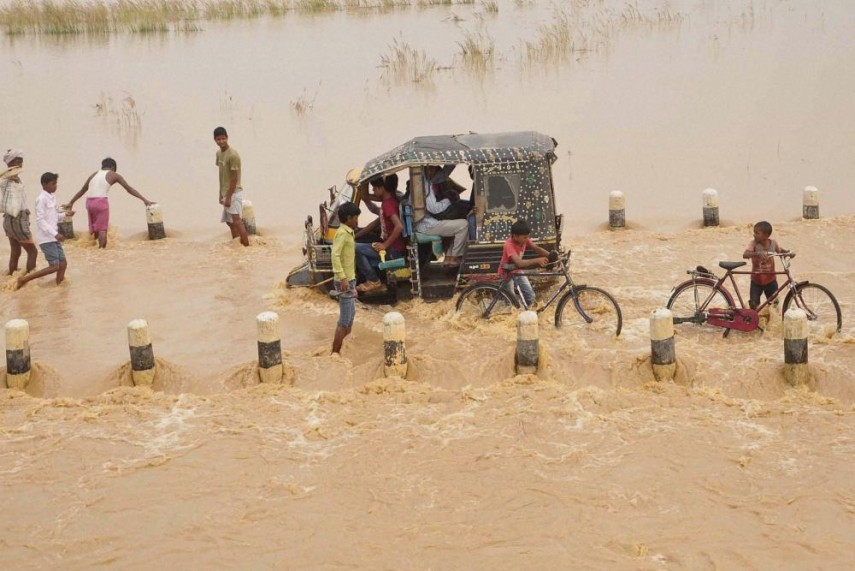 The Falgu river today inundated a vast area in Nalanda district while the Ganga and five other rivers are flowing above the danger mark in Bihar even as intermittent rains kept the mercury down in the national capital.

At least 10,000 people in nine panchayats in Nalanda district were affected by the swollen Falgu river, a statement of the Disaster Management Department said.

The situation has improved in 14 other flood-hit districts of the state but the water level in the Ganga and five other rivers has crossed the danger mark at different places. The Ganga river was flowing above danger mark at Digha ghat, Gandhi ghat and Hathidah in Patna and Kahalgaon in Bhagalpur district.

Other rivers which were flowing above danger mark are- the Sone at Maner and the Punpun at Sripalpur, while the Ghaghra remained in spate in Siwan district.

In the national capital, an overcast sky and intermittent rains kept the mercury down.

Water level of the Yamuna, which swelled through the night breaching the danger mark around 4 AM, has started receding but is still above the warning mark, officials said.

As a precautionary measure, the old Yamuna bridge (Loha Pul) has been closed leading to the cancellation of 15 trains and 100 diversions. Also, a few trains have been short terminated, a railway spokesperson said.

South-West monsoon was normal in Uttar Pradesh as light to moderate thundershower occurred at a few places in the state.

Rains kept the maximum temperature in check in Punjab and Haryana, and abated the sultry conditions prevailing for the last few days.

Chandigarh was the wettest place in the two states, gauging 41.4 mm of rains and recording the maximum temperature at 31.3 degrees Celsius.

In West Bengal, Kolkata recorded the day's highest temperature at 35.2 degrees Celsius, three notches above normal, with the state receiving little or no rainfall.