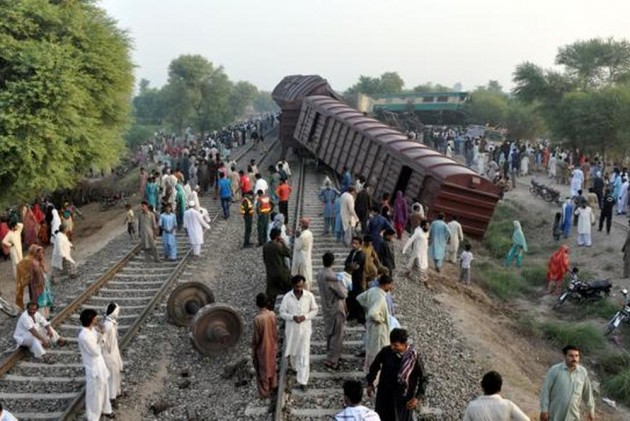 At least six people were killed and over 150 others injured today when a Karachi-bound passenger train rammed into a stationary freight train near Multan in Pakistan's Punjab province.

The pre-dawn incident took place near Bucch railway station in Sher Shah area when Awam Express to Karachi from Peshawar rammed into a goods train whose driver had stopped to remove the body of a man overrun by it, said official Nadir Chattha.

The passenger train moving reportedly at a speed of over 100 km per hour collided with the goods train.

"The Awam Express driver was given the red signal but he could not stop the train in time and the collision took place," said a senior railways General Manager Javed Anwar, adding an inquiry committee has been constituted to probe.

The collision wrecked the engine and power van, and overturned four bogies of Awam Express, he added.

Initial investigations suggest the driver of passenger train was at fault for the crash.

The incident left at least six people dead and wounded over 150, out of which 18 were said to be in serious condition, said rescue official Abdul Jabbar.

The express train's driver and foreman jumped out of the train and are absconding.

"Many passengers were rescued after cutting the coaches. The rescue operation completed in four hours or so and all injured have been shifted to Nishter and other hospitals of Multan," said Jabbar, adding most of the passengers were sleeping at the time of collision.

250 rescue workers provided medical aid to 50 injured passengers on the spot before transferring them to the hospital. All the injured have been taken out of the train.

He said four coaches of the passenger train have completely been destroyed in the accident.

Prime Minister Nawaz Sharif offered condolences to the victims of the accident.

The railways have seen decades of decline due to several factors, including corruption and lack of investment.

Last November, 13 people were killed in southwestern Baluchistan province after a train's brakes failed and it sped down the side of a mountain.