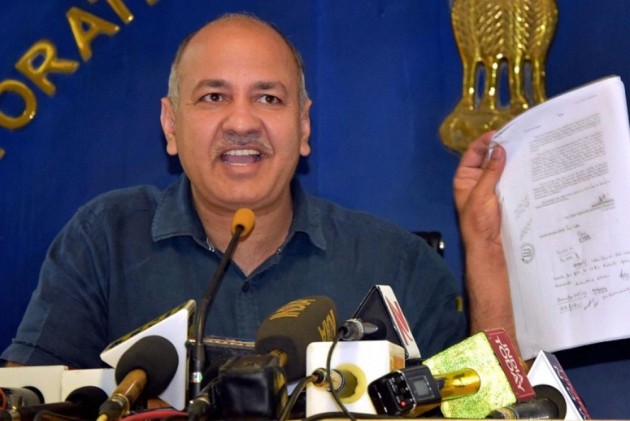 Delhi's Deputy Chief Minister Manish Sisodia and his cabinet colleague Kapil Mishra were detained on Tuesday when they tried to march to Parliament from Jantar Mantar protesting the Centre's demonetisation move.

Before beginning the march, Sisodia launched a scathing attack on Prime Minister Narendra Modi over demonetisation alleging he is making people cry and shedding "crocodile tears".

"We don't like Modi for what he has done in his personal and political life. This is not notebandi but note-badli. The terrorists in Kashmir today were found with Rs 2000 notes. From where are terrorists getting them? Either you are unaware of the lapse or are involved in it.

"He keeps crying all the time and makes people cry. But he sheds crocodile tears. The demonetisation drive should be rolled back. This is what people want," Sisodia said while addressing the gathering at Jantar Mantar.

He was joined by his cabinet colleagues Gopal Rai, Kapil Mishra and Satyendar Jain.

"Neither terrorist funding has stopped nor counterfeit notes nor blackmarketeering. The government has no money to give for OROP to soldiers but waives the loans of industrialists," Sisodia added.

A day after Chief Minister Arvind Kejriwal, who is presently in Punjab, exhorted people to "change" the Prime Minister instead of the defunct notes, slogans of "note nahi, PM badlo" were raised at the march.

"The PM again became emotional... He is not getting any support. Hence, he is crying. The need is to take the fight to the streets," Gopal Rai said.

The Prime Minister had on November 8 announced withdrawal of Rs 500 and Rs 1000 notes. The decision has been drawing criticism from opposition parties.