Singla Never Spoke to Me About Kumar's Appointment: Bansal 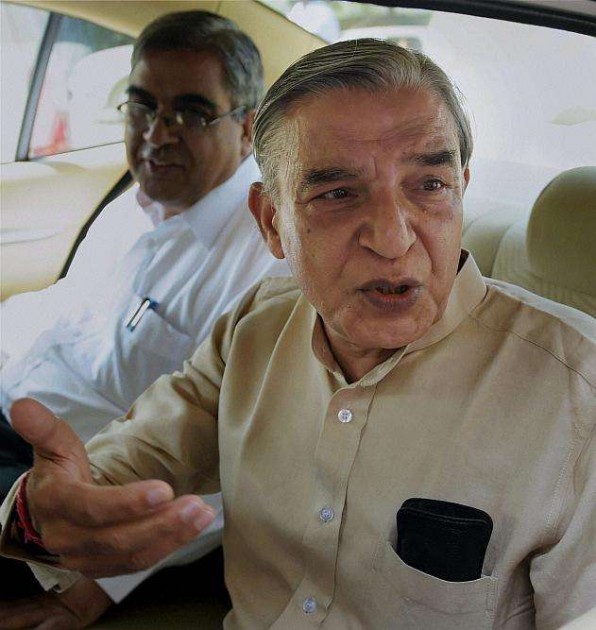 Print
A
A
A
increase text size
Outlook September 22, 2014 17:51 IST Singla Never Spoke to Me About Kumar's Appointment: Bansal

Former Railway Minister Pawan Kumar Bansal today told a special court that his nephew Vijay Singla, facing trial in the Rs 10 crore cash-for-post railway bribery case, "never spoke" to him on appointment of accused Mahesh Kumar, then a Railway Board member, to any post.

Deposing as a prosecution witness in the case, Bansal said that Singla, chargesheeted by CBI for allegedly demanding Rs 10 crore from Kumar for his appointment as Member (Electrical), had visited him thrice during his tenure as the Railway Minister but never talked about Kumar's appointment.

Bansal appeared before the court in pursuance to fresh summons issued on September 16. He was initially summoned as a witness for September 16 but on that day, he was granted exemption from personal appearance on health grounds.

During his deposition, which remained inconclusive today, Bansal said that Kumar was the seniormost eligible person for appointment as Member (Staff) in the Railway Board and he was promoted to that post during his tenure as minister which ended on May 10, 2013.

He submitted that about the time when Kumar was due for promotion, posts of Member (Staff), Member (Mechanical) and Member (Traffic) were to fall vacant but Member (Electrical), which the accused preferred, would have been available only in September 2014.

"I just heard him then. When I discussed briefly the matter with the Chairman, Railway Board, that was the time when I learnt that the post of Member (Electrical) was to fall vacant only in September 2014," he told the court.

Bansal said that when he had gone to Mumbai for an awards function on April 16 and 17, 2013, he had met Kumar but there was no talk about his appointment as Member (Electrical).

"In the later part of the day on April 17, 2013, I returned to Delhi and he (Kumar) did not meet me in Delhi. As stated earlier, the Chairman, Railway Board had brought the proposal of appointment as Member (Staff) on April 18, 2013 to me personally and I had approved it," he said.

Kumar had met him a third time after his file was cleared for appointment as Member (Staff), Bansal said.

"I told him that I had sent his file for the appointment as Member (staff) and that is the end of it as far as I am concerned," he told the court.

"Attention of the witness is drawn to the file....Filling up of the post of Member (Staff) Railway Board, and after going through the same, he states that the said file was brought to him by the Chairman, Railway Board, Vinay Mittal himself on April 18, 2013. He signed it and approved the proposal and returned it to Vinay Mittal....There and then," the court noted while referring to Bansal's statement.

"Some clarification is required by senior PP for CBI from the investigating officer (IO) and the IO is out of station. Therefore further examination-in-chief has been deferred," the court said.

During the day's proceeding, it also recorded the statement of another prosecution witness, K A Sivadas, Under Secretary, Cabinet Secretariat, Rashtrapati Bhavan.

The court had on March 11, this year framed charges against 10 accused in the case under section 120-B (criminal conspiracy) of the IPC read with provisions of Prevention of Corruption Act.