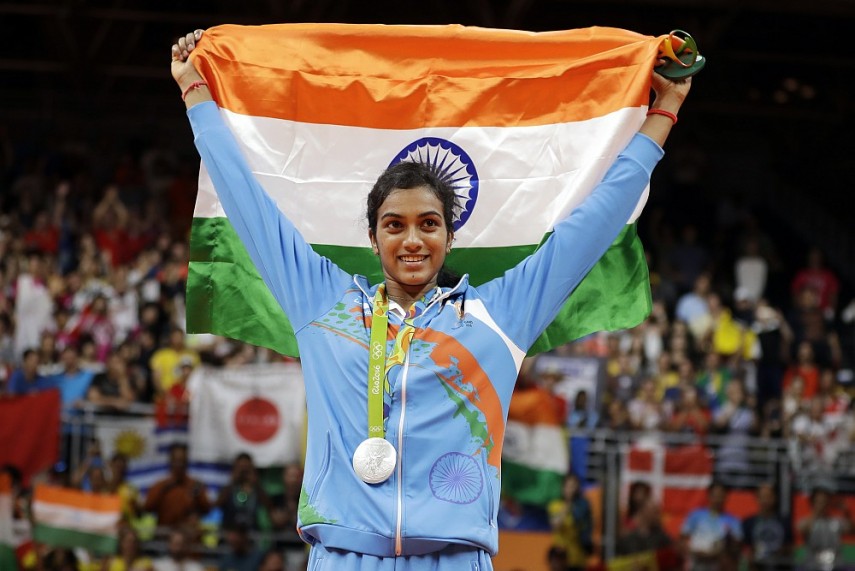 Accolades continued to pour on the trio of PV Sindhu, Sakshi Malik and Dipa Karmakar, all of whom were today presented luxury cars for their Olympic performance by cricket icon Sachin Tendulkar, who lauded their efforts as the beginning of a wonderful journey for Indian sports.

Hyderabad District Badminton Association president Chamundeshwarnath gifted BMW cars to the three girls along with badminton coach Pullela Gopichand for their achievements in the recently-concluded Olympic Games at Rio de Janeiro in Brazil.

Tendulkar, who was the Goodwill Ambassador of the Indian team at Rio Olympics, handed over the keys at a function held at the Gopichand Badminton Academy here.

Under the guidance of Gopichand, Sindhu clinched the silver medal in women's singles, making her the first Indian woman sportsperson to win a silver in the Olympics. Wrestler Sakshi had bagged a bronze in women's freestyle 58kg class.

Dipa, who missed the medal by a whisker, had finished fourth in the vault event and stunned the world by attempting the risky Produnova vault.

On the occasion, Tendulkar said, "This is a wonderful moment for Indian sport. Journey begins here, I am sure this doesn't stop here, we all will be joining that journey and are there to support you. You will keep us giving number of occasions to celebrate."

"The entire nation is happy at this moment and jumping with joy, there are greater things to come," he further said.

The batting maestro also praised Gopichand for being a good role model to the budding shuttlers.

"Gopichand you have been a wonderful role model, you have gone a notch higher. We all admire you. You are a real hero. We need your guidance in getting more medals. I thank various other coaches also," the batting maestro said.

"Your preparation...Sacrificed so many things...You are not allowed to eat certain things and phones were kept aside, to enable you to focus," Tendulkar said.

"We are extremely proud of you, we all are praying for you, we all support you now that you have said you want to convert bronze into gold and silver into gold (in the next Tokyo Olympic games)," he said referring to the medals won by Sakshi and Sindhu. (MORE)

On the occasion, Gopichand appreciated the performances of Sindhu, Sakshi and Dipa.

"The three ladies have made fantastic efforts. India said other day, 'Save the Girl Child' was the norm, but now it is 'saved by the girl' (post results in Rio Olympics). Thank you very much for keeping our honour and pride," he said.

Applauding the girls, he said, "Congratulations to all three of you. Your effort is nothing less than the gold. Over the years, last time (during last Olympics) we had a bronze (Saina Nehwal). Today, thanks to Sindhu's effort we are here with a silver."

He also praised Tendulkar saying he is a great ambassador for sports.

Shuttler P V Sindhu recalled, "When I was gifted a Swift Dzire earlier, Sachin sir told me that if I would win an Olympic medal he would definitely gift me another car. That happened today. I thank Sachin sir and Chamundi sir for gifting me a car."

Sindhu said she is thankful to everyone and added "because of your blessings I am here."

"Overall it is my dream and it has come true that I had to get an Olympic medal. I am thankful to my coach because the whole journey till now I am with him. In the upcoming tournaments, definitely I will get laurels for the country," she said.

Overwhelmed by the felicitations, Sakshi said, "I went alone (to Rio) and now entire India is with me. Continue with your love so that I can convert my bronze into gold at Tokyo Olympics. Thanks for honouring me."

Dipa also thanked everyone saying "bina medal key bhi itna mujhe support mil raha hain (I am getting so much support without even winning a medal). Thank you Sachin sir."