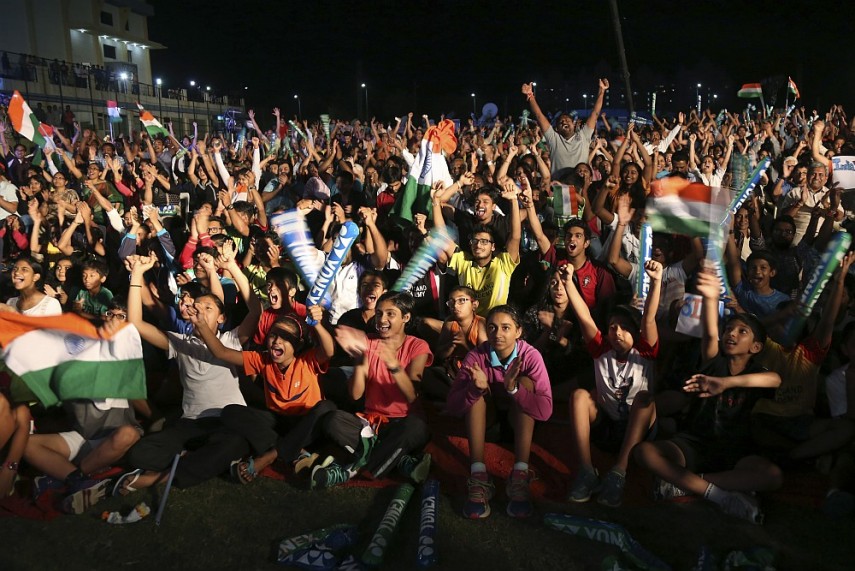 Amidst scenes of jubilation and a sense of pride, Olympics silver medallist P V Sindhu was today accorded a rousing welcome on her arrival to home town and felicitated by Telangana government for her stupendous performance at Rio Games.

The 21-year-old, who landed with her coach Pullela Gopichand, was received at Rajiv Gandhi International Airport by her parents P V Ramana and P Vijaya, some Telangana and Andhra Pradesh Ministers, amidst cheers from crowds.

A beaming Sindhu, displaying her silver medal and waving to the crowds, was then taken in a open-top-motorcade along with Gopichand to Gachibowli Stadium, where the government felicitated her along with her coach in the presence of a capacity crowd.

Sports-lovers and fans, particularly school children, some with national flags in their hands waved to Sindhu at several road junctions along the route to the stadium where excitement was in the air.

School children held banners hailing the badminton star, who caught the imagination of the country with her superb run at Rio. They raised slogans such as 'P V Sindhu Pride of India', and many of them also showered flower petals on the motorcade.

A celebratory mood prevailed at the stadium, where an enthusiastic crowd, mostly school and college students, welcomed her amid beating of drums by traditional 'Dappu' dance artistes.

"I never expected such a huge turn-out; it made my day," said a smiling Sindhu, overwhelmed by the huge reception.

"Thanks for the support and blessings. I thank my Guru (P Gopichand)...My parents, who supported and motivated me. I would like to thank everyone," she said at the felicitation event, attended by her parents, Union Minister Bandaru Dattatreya, Telangana Deputy Chief Minister Mohd Mahmood Ali and IT Minister K T Rama Rao, among others.

Gopichand thanked the Telangana government for its support and for announcing rewards.

Praising the two Indian medal winners at Rio, he said, "Hats off to the women (Sindhu and grappler Sakshi Malik) for actually saving the respect of India in front of the whole world."

"It's huge support from the government and also for financial rewards. It is unprecedented. I am sure this will inspire and help in preparing lot of champions and lot more sportspersons," Gopichand said.

Rama Rao told Sindhu's parents that they should be proud of her as she has now become "daughter of India", and announced that the government would come out with a new sports policy after holding consultations with Gopichand and other Arjun awardees.

There is a need to prepare a comprehensive plan for future Olympics, the minister said.

Speakers at the event praised the efforts and sacrifices made by Sindhu's coach and her parents for her success at the international level.

The Telangana government had earlier announced Rs five crore cash reward for the 21-year-old, a 1,000 square yard housing site near the Pullela Gopichand Badminton Academy in Gachibowli and suitable government job, if she is willing, and a cash prize of Rs one crore for Gopichand.