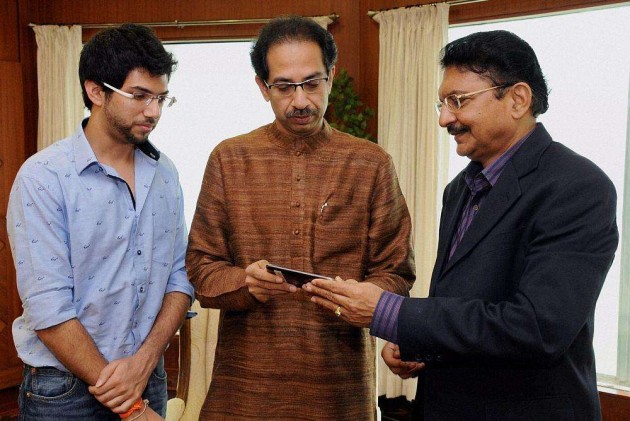 Having blown hot and cold through the day, Shiv Sena and BJP leaders finally sat down for talks this evening after which they gave indications that a seat-sharing deal would be clinched for the October 15 Maharashtra assembly polls and the alliance salvaged.

Shiv Sena president Uddhav Thackeray kept himself away from talks for which he deputed his son and Yuva Sena chief Aditya and Sena leader in the state assembly Subhash Desai, who met BJP's Maharashtra election incharge O P Mathur.

"There will be differences in any alliance. Both are showing no egos... We want to take the alliance ahead," Aditya Thackeray told reporters after the meeting, the first in about a week with BJP leadership.

"How to take the alliance forward will be discussed. Sena is looking at protecting the future of Maharashtra," he said.

State BJP president Devendra Fadnavis said his party had given a proposal to Shiv Sena on distribution of seats and hoped there would be a positive response to it.

"Nobody wants to break the alliance. We have given a proposal and are hoping to get an appropriate and positive response," he said.

Maintaining that the ball was now in Sena's court, Mathur said, "They came to discuss... We have given our proposal and it is now for them to decide."

The negotiations followed a core committee meeting of the state BJP where it was decided that a fresh proposal be sent to Sena on seat-sharing.

There were reports that Shiv Sena had offered BJP 119 seats with a rider that it also accommodate smaller allies of 'Mahayuti', a rainbow alliance including smaller parties like RPI(A) and Swabhimani Shetkari Sanghatana, in its quota.

Shiv Sena had earlier rejected BJP's proposal that the two major allies of 'Mahayuti' contest 135 seats each and leave the rest for smaller partners.

Though the contents of the BJP's proposal were not known, the party had after its core committee meeting said it wanted to swap seats that Sena had not won in years.

"We will send a proposal to Sena on the number of seats we want to contest. There are 59 seats where Sena didn't win in the last 25 years and 19 where BJP didn't win. We want Sena to consider this fact. We want discussion on each seat," former state BJP president Sudhir Mungantiwar told reporters after the meeting.

"We have been hearing from the media that Sena has offered us the same 119 seats we contested in 2009 polls. We will not commit such a mistake of adopting a via media to convey our proposal and send it directly to Sena," he said.

Tough posturing by both parties preceded the evening talks even though they expressed their desire for the alliance to continue "but not at the cost of self-respect".

Shiv Sena, which had yesterday rejected BJP's reported 'ultimatum' to finalise a seat-sharing pact or be ready to part ways, declared it will continue to be the senior partner in Maharashtra where its leader will become the Chief Minister, a major bone of contention between the two oldest NDA allies.

"In Maharashtra, Shiv Sena is the party which gives (seats) and not the one that asks (for seats). It was a bigger party in the state and will remain so.

"Shiv Sena has been in Maharashtra politics even before BJP was born. It doesn't matter whether there is an alliance or not. The Chief Minister will be be from Shiv Sena," Party spokesman and MP Sanjay Raut said.

Raut said a meeting of the party's executive has been called on September 21 which will be attended by all MPs and MLAs where Sena president Uddhav Thackeray will announce the final decision on alliance with BJP.

Raut said the party's core committee had in its meeting last night authorised Uddhav to take a call on the alliance keeping in mind the "prestige of Maharashtra, self respect of the party and Balasaheb Thackeray's principles".

He, however, sought to temper the tough talk by rubbishing media reports that the two saffron allies were headed for a split.

"We have been together for 25 yrs. But no news of breaking the alliance has reached us yet. We have not given any (seat sharing) formula to our alliance partner but self respect is more important," he said.

On its part, BJP reminded Sena of the sacrifices it had made to keep the two saffron allies together.

Leader of Opposition in Assembly Eknath Khadse sought to remind Sena that BJP had ceded additional seats to it in Lok Sabha polls.

"Earlier BJP used to contest 32 and Sena 16 of the total 48 Lok Sabha seats in Maharashtra. We later gave six more seats to them with the aim of keeping the alliance intact," he said.

Mungantiwar listed occasions when Shiv Sena had taken positions that were against the official stand of the NDA but BJP did not object for the sake of the alliance.

"In the past, we did not object when Sena backed Pratibha Patil for President's post and later Pranab Mukherjee. Sena had also backed Sharad Pawar for PM's post. We maintained restraint to ensure that our old alliance with Sena does not break," Mungantiwar said.