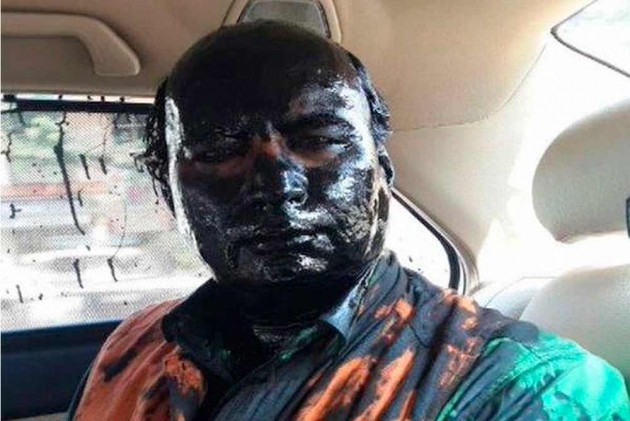 However, undeterred by the violent protest, which Shiv Sena called "very mild", the organisers, including the Observer Research Foundation, went ahead with the programme which was held amid tight security following threats of disruption by the pro-Hindutva party.

A group of Shiv Sainiks intercepted the car of Kulkarni, chairman of ORF, a foreign policy think tank, just outside his Matunga home this morning and painted his face black.

A defiant Kulkarni, however, said he will not be "cowed down" by such actions and go ahead with the evening launch of Kasuri's book     'Neither a Hawk nor a Dove: An Insider's Account of Pakistan's Foreign Policy'.

"This shows your resolve, our resolve and common resolve, the resolve of millions of Mumbaikars to defend the values of tolerance and diversity," Kulkarni said in his opening remarks at the event held in the evening at Nehru Centre in Mumbai.

"I am immensely proud of Marathi, Mumbai. Mumbai is Maharashtrian, but before that it is national and international city. It is tolerant, inclusive, liberal, democratic and multi-faith city," he said.

Kasuri, on his part, thanked Maharashtra Chief Minister Devendra Fadnavis for providing "excellent protection" during his stay in the city.

The blackening of Kulkarni's face drew unequivocal condemnation from political parties including BJP, but Shiv Sena defended the action.

BJP patriarch L K Advani, with whom Kulkarni has been closely associated, voiced concern over "growing intolerance" in the country towards any counter viewpoint.

"I strongly condemn whosoever has done it.... In the last few days, there are these signs...Where any person or any point of view is not acceptable, then you resort to violence or turn intolerant towards them.

"This is a matter of concern for the nation. Democracy must ensure tolerance for a different point of view," Advani said in Delhi.

However, the Sena justified the incident and said it was "a very mild" form of protest.

"Smearing ink is a very mild form of democratic protest. We don't know if ink or tar was smeared. Nobody can foretell how public anger will explode.

"They are so upset about ink. Imagine when our soldiers are killed and their blood is spilled. It is not ink, it is the blood of our soldiers," Raut said as he accused Kasuri of having brought together all extremist anti-India organisations to "suit Pakistan's Kashmir agenda".

Union Minister of State for Home Kiren Rijiju also disapproved of Shiv Sainiks' action, saying everyone has the freedom to protest but not physically harm anyone.

"This is about mentality...In this country, everyone has a fundamental right to protest but there has to be a way to protest, not physically harm anyone. This is not right," he said.

Congress general secretary Digvijay Singh equated the Sena with the Taliban and said," such intolerance in India can't be tolerated."

Party spokesperson Abhishek Singhvi claimed incidents of "intolerance" have risen over the last 18 months after the BJP came to power and questioned Prime Minister Narendra Modi's silence on these.

Shiv Sena had recently forced the organisers of concerts of Pakistani Ghazal singer Ghulam Ali to cancel his shows planned in Mumbai and Pune.

After the Sena threatened to disrupt the book launch function if the organisers did not cancel it voluntarily, Kulkarni had met its chief Uddhav Thackeray last night and reasoned with him to allow it to be held as Kasuri was not Pakistan's foreign minister either during the Kargil conflict or the 26/11 attacks, two major sore points in Indo-Pakistan relations.

Kulkarni said he also suggested that a Sena representative could be on the dais to present a counter-point if he so desired. However, these failed to cut ice with the Shiv Sena leader.