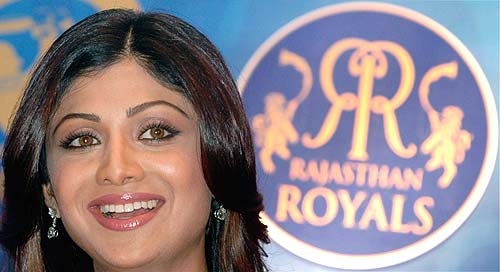 outlookindia.com
-0001-11-30T00:00:00+0553
Bollywood actress Shilpa Shetty and Dubai-based businessman Raj Kundra have picked up 12 per cent stake worth over USD 11.6 million in the Rajasthan Royals franchise team that won the inaugural 2008 season of the Indian Premier League.

"It's a strategic business investment. I always support the underdogs as I am myself one. Rajasthan Royals were the underdogs in IPL before they succeeded (in winning the title)", Shetty told a media conference.

"Cricket is not a sport in our country, it's a religion. I am very passionate about cricket and who better to invest in than the current reigning IPL champions. It completes the success story for the IPL team by merging with Bollywood," she added.

Shetty has invested her money in the Rajasthan Royals team, co-owned by Manoj Badale who is also its chairman, as the CEO of S2 Global Productions Private Limited. Her business partner in the venture is Raj Kundra, the CEO of Dubai-based Essential Trading Company.

Kundra said he has heeded the advice of his father to always invest in a successful venture and the triumphant Royals franchise team fit it perfectly.

Badale, announcing the selling of 12 per cent stake in Rajasthan Royals was valued at USD 140 million, said that last year the focus was to make it a well-known brand in India and this year the strategy was to globalise it.

"We wanted to find a strategic partner to develop the commercial properties. We want to make Rajasthan Royals into more than a cricket franchise, want to make it into a global brand. It was the second-most popular team in all of India last year, and obviously the number one in Rajasthan", he said.

Badale also announced that the focus of the Royals team would always remain cricket-specific and that this year the team will include a few young players who already have had a few interactive sessions with Australian spin legend and the team's captain-cum-coach Shane Warne.

"Cricket was and is always our focus. We are always for developing new players and this year we plan to introduce nine young players. Shane Warne has already made a couple of visits to India and interacted with them," he said.

Terming the Pakistan government's decision to bar the country's players from taking part in this year's IPL as disappointing, in the wake of the tensions between the two countries in the aftermath of the Mumbai terror attacks, Badale said the team did not target a specific player during the IPL player auctions in Goa on February 6.

"We would not be having last year's bowler of the IPL Sohail Tanvir and a few other Pakistan players. We have to become smart and fill up their spots. We are targeting all 43 players. We are not interested in specific players. The important thing is to have the right balance in the team", he said.

He also claimed the global economic meltdown has not affected the team's sponsorships.

"Having prepared well in cricket the first year we have not seen any slowdown in interest from sponsors," Badale said.

Shetty said she would have a role in the team's promotional activities this year. "I will be promoting the team. Perhaps a music video will also come," she quipped at the media meet.