Shastri to Continue as Indian Team Director for Bangladesh Tour 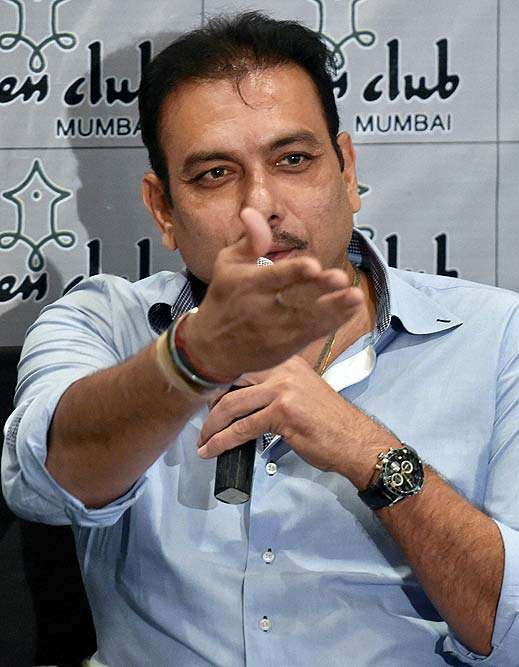 Print
A
A
A
increase text size
Outlook June 02, 2015 11:35 IST Shastri to Continue as Indian Team Director for Bangladesh Tour

Former captain Ravi Shastri was today retained as Director of the Indian cricket team for the tour of Bangladesh starting June 10 as the BCCI continued its search for a new permanent coach to succeed Duncan Fletcher.

Shastri, who served as Team Director during the tour of Australia and the subsequent World Cup earlier this year, is a stop-gap arrangement for the short trip. Fletcher's tenure had ended earlier this year after the World Cup.

"The BCCI wishes to inform that Mr. Ravi Shastri, former India Captain, has been appointed as Director of the Indian cricket team for the tour of Bangladesh, starting on 10 June 2015," BCCI Secretary Anurag Thakur said in a statement.

Thakur said Shastri's appointment was a stop-gap arrangement and the Board will name a permanent coach later. The full-time coach's appointment will be done after consulting the newly-formed advisory committee of the BCCI, which comprises former greats Sachin Tendulkar, Sourav Ganguly and VVS Laxman.

"This (the appointment of Shastri) is for the Bangladesh tour and future decisions will be taken after this," Thakur said.

India will play one Test and three One-Day Internationals during the tour of Bangladesh. From June 10 in Fatullah, India will play the one off Test against Bangladesh, followed by three ODIs in Mirpur (June 18, 21, 24). The team will leave for this assignment on June 7 from Kolkata.

Shastri represented India in 80 Tests and 150 ODIs for India and was part of the side, which lifted the 1983 World Cup.

Shastri had travelled with the Indian team to Bangladesh in 2007 as cricket manager after Greg Chappell resigned from the coach's post following the World Cup debacle that year.

Under Shastri's guidance earlier this year, the Indian team lost the Test series in Australia 0-2 after a fighting performance but went down tamely in the ODI tri-series that followed.

In the World Cup in March, the Indians, who were the defending champions, were ousted in the semifinal stage.

Yesterday, Tendulkar, Ganguly and Laxman were inducted into the BCCI to guide the Board and the national team on various "progressive steps" needed for future challenges.

The BCCI said the three legends' guidance will be sought in preparing the national team for gruelling overseas assignments besides strengthening the domestic structure.

The panel is due to meet on June 5 in Kolkata and its inputs will be sought while picking the new head coach, whose name could be out ahead of the July tour to Zimbabwe.

Continue FREE with Ads Pay Rs. 1 to Read Without Ads
READ MORE IN:
Ravi Shastri Sports
Next Story : Would Like to Work With Priyanka, Rahman: Edward Maya
Download the Outlook ​Magazines App. Six magazines, wherever you go! Play Store and App Store