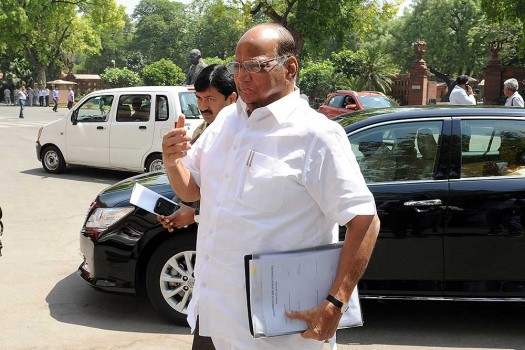 NCP supremo Sharad Pawar today said all the like-minded parties need to come together to counter the BJP.

He also said that with Yogi Adityanath becoming the Chief Minister of Uttar Pradesh, "mandir-masjid" politics may get a boost.

"Looking at the kind of support BJP has garnered in the Assembly elections, it is very clear that all the like-minded parties need to come together (to face it)," said Pawar, who was here to inaugurate NCP's new office.

"All the (non-BJP) parties need to do introspection about their shortcomings. To provide a strong alternative to BJP, it is necessary that all the like-minded parties come together," he said, speaking to reporters.

Asked if any talks had started for this purpose, he said he wasn't aware.

"It is a suggestion. As of now, no detailed discussions have been held....If NCP gets a proposal to be a part of such alliance, we will respond positively," he said.

On the hardliner BJP leader Yogi Adityanath becoming the Chief Minister of UP, Pawar expressed fear that communal politics may take precedence in the northern state.

"Being such a big state, UP needs a leadership with a clear foresight to execute development agenda. However I am now worried about the people of UP, as the new leadership might pay more attention to `mandir-masjid' issues rather than bringing real development," he said.