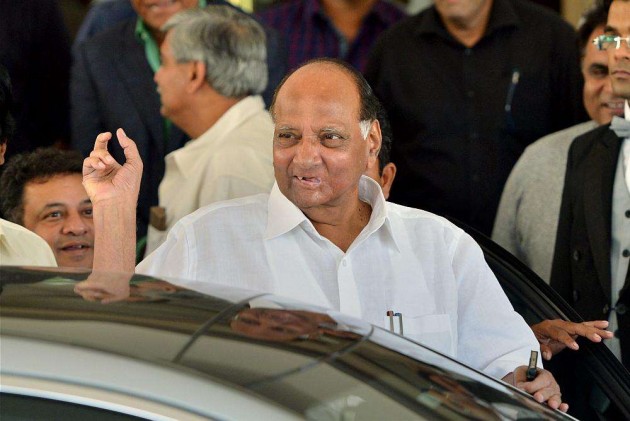 Maratha strongman Sharad Pawar was today unanimously re-elected as the president of Nationalist Congress Party (NCP) and used the occasion to launch a broadside against Prime Minister Narendra Modi accusing him of indulging in game of politics on foreign soil.

Pawar has held the post ever since he founded the party in 1999 after parting ways with Congress.

Attacking Modi, he said, "Indulging in the game of politics on foreign soil is a serious issue and in doing so, the country's image had taken a beating."

Modi had hit back at the opposition over its criticism about his frequent foreign visits, saying he was being attacked for "tireless" work and had asserted that if it was a "crime" he would continue to do it.

The Prime Minister Narendra Modi had also taken potshots at previous governments which practiced 'Look East' policy, saying India has had enough of it and it's time to 'Act East'.

Pawar also lashed out at the Modi government for using all means at its disposal to implement its "saffron" agenda and ideology.

"Recently some experts from IIT met me in Delhi and told me how the saffron agenda was being pushed through in education,"he said.

Speaking at the national convention of the party where he was re-elected president, Pawar said, "In the name of development, saffron ideology is being implemented. It is a challenge and NCP has a national duty to counter it."

Pawar described the upcoming Bihar assembly elections as the defining moment for politics in the country.

"It is our responsibility to bring all democratic parties on a single platform to ensure huge defeat of BJP," Pawar said.

Stating that Bihar was the route of every big change that takes place in Delhi, Pawar said reality of false assurances and hollow slogans of Modi government will be exposed in the Bihar polls and BJP would bite the dust.

Stating that lack of social harmony was a big challenge posed by Modi government in addition to increasing uncertainity in agriculture and economy, Pawar said india was a live example of unity in diversity.

"It will be injustice to the basic characteristic of India to impose uniformity on it", he said adding, "If not checked strictly, then it will have far reaching repurcussions."

Pawar accused the Centre of ignoring farmers and farming sector. The budgetary provision for agriculture and allied sectors was slashed this year, he said.

"The minimum support price of crops declared by Modi government is less than the MSP declared by UPA government. The Centre has issued directives to the states that they cannot pay more. The MSP is declared by the Centre", he said.

The cost of production has far outstripped the increase in selling price of crops during the last three years, he added.

"Both farmers and agriculture are in crisis. But the matter of irony is that new land law proposed by the Centre as solution to these problems, is actually going to render all farmers landless," he said.

"Even majority of the corporate world has started saying that the directionless economic policies of the government are mired by mere slogans and promises," Pawar said.

The political and economic resolutions adopted at the meeting came down heavily on the Centre's policies and also reiterated the party's strong opposition to the land acquisition ordinance.

The political resolution calls for starting dialogue with all political parties barring BJP. Similarly the resolution details steps to be taken to streamline and strengthen the party.