Shah, Modi Always Have Been Scared Of My Father, Seems They Are Scared Of Me Too: Tejashwi On CBI FIR 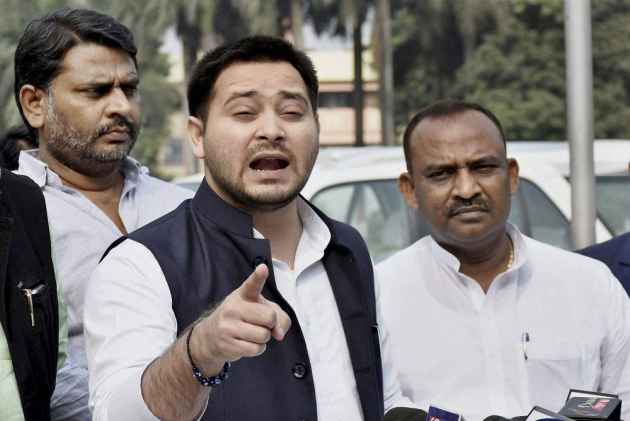 Print
A
A
A
increase text size
Outlook July 12, 2017 15:45 IST Shah, Modi Always Have Been Scared Of My Father, Seems They Are Scared Of Me Too: Tejashwi On CBI FIR

Holding the Bharatiya Janata Party (BJP) solely responsible for the corruption charges slapped against him, Bihar deputy chief minister Tejashwi Yadav on Wednesday remained defiant about not succumbing to the pressure or resigning, citing that the charges were a part of a political vendetta against him and his family.

Tejashwi further said he was not surprised when the saffron party had a problem with the Rashtriya Janata Dal (RJD) supremo and his father Lalu Prasad Yadav, but to be fearing the 28-year-old him is beyond his imagination.

""I can only say this is a political vendetta by the BJP. The main leaders attached to it are Amit Shah and Narendra Modi. They have always been scared of my father, but it seems they are scared of me too. Right from the beginning, they are trying to break the 'mahagathbandhan', and accuse us in all possible ways. Not just us, they are always ready to malign Bihar for all possible crime," he said, while emerging out of the meeting, held by chief minister Nitish Kumar, of all MPs, MLAs and other office bearers and leaders of the state to discuss the political situation in the wake of CBI raids on alliance partner Lalu Yadav and family.

"The BJP is surprised to see a 28-year-old to not just rule the state, but also govern it efficiently. We will take an action against them. They don't deserve a place here," he added.

Further denying the charges made against him, Tejashwi said that the charges dates back to 2004-2006, when he was a 14-year-old and a teenage couln't be committing crimes.

Tejashwi further said that their government in the state has always followed a 'zero-tolerance towards corruption' policy and hence, no one can point fingers at him.

"Since the day I joined office, I had made it clear that I will follow zero intolerance against corruption. During my reign as Bihar's deputy CM, I have not done anything aganist the government and its function. All the three departments under me flourished with progress towards the state," he said.

Earlier, with the growing demand of Tejashwi's resignation following the corruption charges, the JD(U) had asserted that it hoped the "accused come forward and provide evidence to prove their innocence."

"We hope that the accused come forward and provide evidences to the public to prove their innocence so that the people can be assured that the allegations which have been framed are incorrect. It is their responsibility to provide proofs," JD(U) official spokesperson Neeraj Kumar said in a press briefing after the party meeting here, in an indirect reference to Lalu Yadav's family, around which the Central Bureau of Investigation (CBI) recently tightened its grip.

He said the JD(U) understands the importance of an alliance and will work till the end with the RJD.

The case was registered on the allegations of awarding the tender for development, maintenance and operation of Hotels at Ranchi and Puri to a Private Company dealing with Hotels in the year 2006.

The investigative agency also conducted searches at 12 locations across Patna, Delhi, Gurugram and other places.

The RJD supremo, however, refuted the allegations against him and called it a political conspiracy hatched by the BJP.