Serena Beats Venus to Sustain Slam Bid at US Open 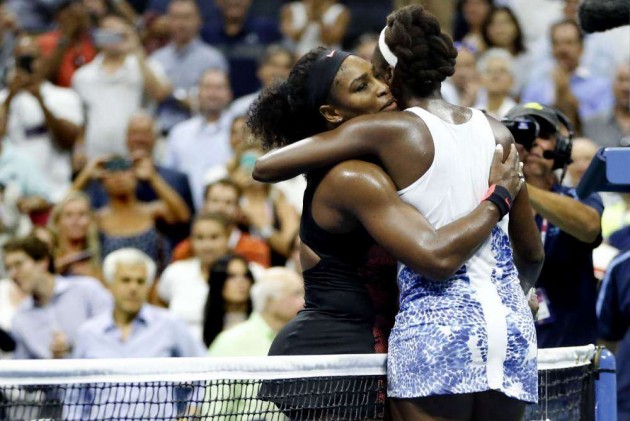 Print
A
A
A
increase text size
Outlook September 09, 2015 09:55 IST Serena Beats Venus to Sustain Slam Bid at US Open

World number one Serena Williams stayed on course for the first calendar Grand Slam since 1988, advancing to the US Open semi-finals Tuesday by defeating older sister Venus Williams 6-2, 1-6, 6-3.

Playing at a high level throughout, the sisters staged a classic at Arthur Ashe Stadium, which was jam-packed with fans and celebrities, including US Presidential hopeful Donald Trump and TV mogul Oprah Winfrey.

"This is a big moment for Venus and I," Serena said. "Very competitive. We were just trying to give each other a great match."

Three-time defending champion Serena, the younger sister by two years at 33, improved to 53-2 on the season and took a 16-11 edge in the sibling rivalry, including an 9-5 advantage in Grand Slam meetings and a 3-2 lead in US Open results.

Serena, seeking an Open Era record seventh US Open crown overall, is on a 33-match Grand Slam win streak and a 26-match US Open win streak, her last loss on the Flushing Meadows hardcourts coming to Samantha Stosur in the 2011 final.

Venus, on her deepest US Open run in five years, was seen as one of the big threats to spoil Serena's historic run.

Venus, seeded 23rd, sought her third US Open crown after 2000 and 2001 to add to a Slam trophy haul that also includes five Wimbledon titles, the most recent in 2008.

"She's the toughest player I've ever played in my life and the best person I know," Serena said of Venus.

"It's going against your best friend and the best competitor in women's tennis.

"When I'm playing her I don't think of her as my sister. When you're in the moment you dont really think about it.

In the third set, Serena fired a backhand winner to break Venus, fought off a break point to hold for a 3-0 edge and held serve to the end of the 98-minute spectacle.

"Just holding serve in the third set was all I could do," Serena said. "She was blasting so hard. She had so much power. It wasn't easy at all."

Serena is 4-0 in her career against Vinci, 32, who reached her first Grand Slam semi-final in her 44th Slam start.

"Amazing moment for me. It's unbelievable," Vinci said. "First semi-final in my career. I'm so happy, I don't have words to say."

The Serena-Venus rivalry, born on concrete courts in rough neighborhoods of 1980s suburban Los Angeles, is the second-most contested at Grand Slam events in the Open Era, their 14 meetings second only to the 22 between Martina Navratilova and Chris Evert.

"It's a big pressure," Serena coach Patrick Mouratoglou said of his pupil facing Venus. "But it's the pressure that helps you lift your level."

The Williamses tested each other emotionally and with some of the best skills in tennis.

Venus saved a break point and held serve in the opening game and both players followed with impressive shotmaking.

Serena broke in the fifth game with a forehand winner and the seventh when Venus sent a forehand long, then held at love to claim the first set after 33 minutes.

Serena double faulted to surrender her first break, giving Venus a 3-1 lead. Venus held at love, broke again and held when Serena netted a forehand to force a third set, the 11th Serena faced in her calendar Slam run.