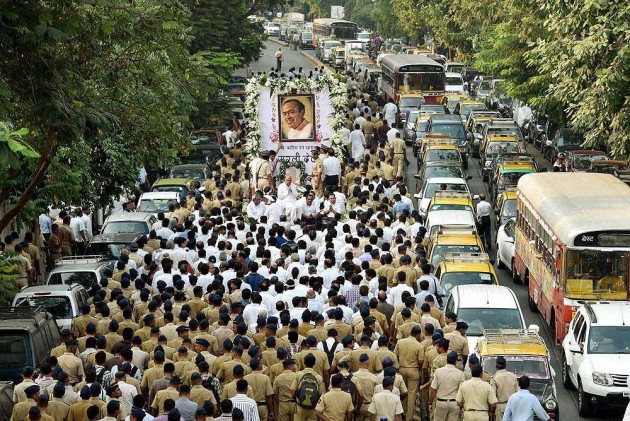 Congress veteran from Maharashtra Murli Deora, a Gandhi family loyalist, who held important posts in the party and Government during his over four decade-long political career, passed away here today after prolonged illness. He was 77.

Deora had been unwell and was admitted to a hospital from where he came home two days back. The end came at 3.25 am, family sources said.

Murlibhai, as he was fondly called, is survived by wife and two sons, including former MP Milind Deora, who also served as a Union Minister.

Congress President Sonia Gandhi, her son and party Vice-President Rahul flew down to Mumbai to pay tributes to the departed leader. They were accompanied by Priyanka Gandhi and her husband Robert Vadra.

Leaders cutting across party lines paid tributes to Deora, who had friends across political spectrum and also in the corporate world.

Deora's mortal remains were later taken to Chandanwadi crematorium in South Mumbai, where he was cremated with state honours. His sons Milind and Mukul performed the last rites.

Deora was India's longest serving Petroleum Minister (he served under UPA 1 & 2) and held important posts in the party and Government during his over four-decade-long career.

He was elected to Lok Sabha four times from the prestigious Mumbai South seat. He served as President of Mumbai Congress for 22 long years.

A Gandhi family loyalist and a close confidant of former Prime Minister Rajiv Gandhi, Deora was a key party fund raiser who was on personal terms with most of India's well-known industrialists.

Sonia later went to Deora's residence in South Mumbai where she met his wife Hema and consoled her.

Deora made his electoral debut in 1975 when he contested civic elections in Mumbai. He was Mayor from 1977 to 1978 and then entered Lok Sabha from Mumbai South, a seat later represented by his son Milind. Currently, he was serving his third term as a Rajya Sabha MP.

Deora held the key portfolio of Petroleum and Natural Gas during the UPA—1 regime. He joined the Union Cabinet in 2006, shortly before he turned 70, and led India's oil diplomacy in Myanmar, Algeria and Egypt, and held talks with Ministers from Sudan, Chad, Ethiopia and Comoros.

Deora, an economics graduate, was retained in the Oil Ministry when UPA won a second term in 2009, but was moved to Ministry of Corporate Affairs in January 2011 and finally dropped from the Cabinet later that year.

Maharashtra Chief Minister Devendra Fadnavis said Deora was a grassroots leader who was connected with top business leaders as well as the common man.

State Congress President Manikrao Thakre said the party had lost an experienced guide and mentor. "Deora's political journey was an inspiration to all."

AICC General Secretary Gurudas Kamat, former Ministers Narayan Rane and Naseem Khan and former MP Priya Dutt were among those present at the Mumbai Congress office to pay respect to the late leader.

Speaking in Nashik, NCP leader and former Minister Chhagan Bhujbal said Deora had a warm and friendly nature, and he was on good terms even with members of Opposition parties.