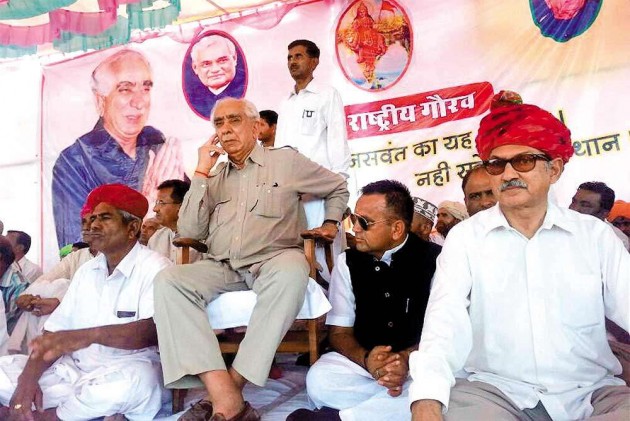 Senior leader Jaswant Singh was tonight expelled from BJP after he refused to withdraw his nomination as an independent candidate against the party's official nominee in Rajasthan's Barmer Lok Sabha constituency on the last day of withdrawal of nominations.

The decision to expel the 76-year-old veteran leader for six years was taken by BJP president Rajnath Singh, a party statement said.

The party expelled another rebel leader Subhash Maharia, former union minister, who is contesting as an independent from Rajasthan's Sikar constituency against BJP's official nominee.

Singh is contesting as an independent against the party's official candidate Sonaram Choudhary, who had recently joined BJP after switching over from Congress.

The statement said that the party's constitution does not allow members to contest as independents against its official candidates.

"As per section 25(9) of the party's Constitution, any leader contesting against the party's official candidate is liable for immediate expulsion.

"Accordingly, as per BJP President's directions, Jaswant Singh, MP, and Subhash Maharia, special invitee member of the party's national executive, have been expelled from the party for six years with immediate effect," said a party statement by BJP general secretary J P Nadda.

This is the second time in five years that Jaswant Singh was expelled from BJP. In 2009, he had been expelled for his controversial book praising Pakistan founder Mohammed Ali Jinnah. However, he was taken back in the party-fold in June 2010.

The expulsion of Singh and Maharia was conveyed by BJP General Secretary J P Nadda in a communication to Rajasthan state party chief Ashok Parnami.

The expulsion comes after Parnami had written to the party

today about Jaswant Singh and Maharia's nominations from Barmer and Sikar against the party's official candidates and had not withdrawn till the last date for withdrawals.

The BJP's state unit and the party units in Barmer and Sikar had demanded disciplinary action against the two leaders.

"Jaswant Singh has exhausted all constitutional options available to the party by deciding not to withdraw from the contest," a senior BJP leader said here.

Parnami, without naming Singh or Maharia, said in Jaipur earlier in the day that all rebel candidates could be expelled from the party for six years.

Continue FREE with Ads Pay Rs. 1 to Read Without Ads
READ MORE IN:
Jaswant Singh National
Next Story : 239 Candidates in Fray for Phase I Polls in Rajasthan
Download the Outlook ​Magazines App. Six magazines, wherever you go! Play Store and App Store