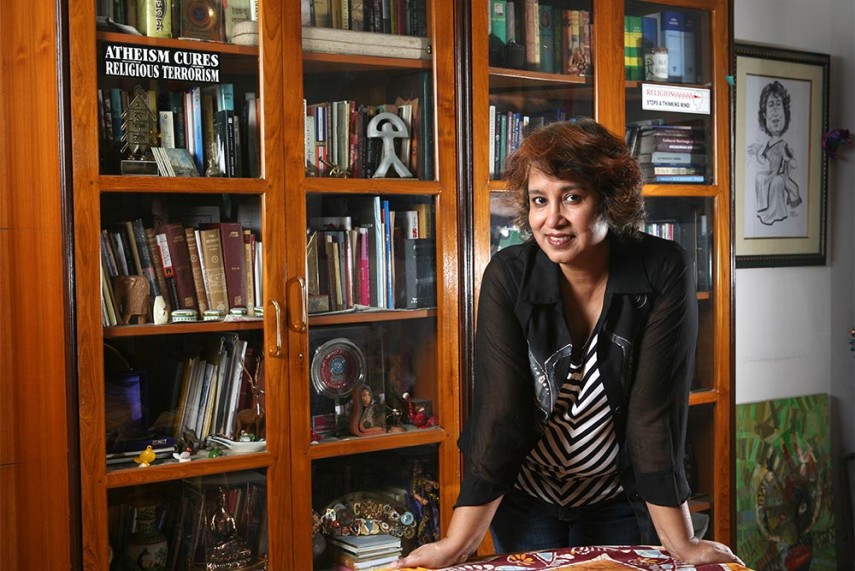 For noted Bangladeshi writer Taslima Nasreen, who has faced the ire of fundamentalists on several ocassions, self-censorship is the worst form of censorship.

With attacks against writers, minority religious leaders, and atheist bloggers on the rise in Bangladesh, Nasreen says many authors have now been forced to resort to self-censorship to avoid facing fatal consequences.

"In our part of the world we have problems regarding freedom of expression. Many people do not speak what they want to. And, most writers in Bangladesh now self-censor themselves. Otherwise they will be hacked to death. But, for me it is the worst form of censorship," she said.

"Even when I write for newspapers, editors cut several sentences before printing," she said.

The 54-year-old author has been living in exile in India after having incurred the wrath of fundamentalists back home over a novel written by her in 1994.

According to the writer, a voracious advocate of freedom of speech, sentiments of one group or the other will invariably be hurt, no matter what one writes.

"My sentiments are offended by the death threats I receive from Islamic fundamentalists but that doesn't mean I want to kill people for that. I have an inbuilt mechanism to face all this. The fundamentalists, however, are so weak that they can't tolerate what I say," she said.

Despite being a permanent European citizen and an American resident, the doctor-turned-author refuses to stay anywhere but India.

Initially, she was residing in Kolkata, but following a riot in the region, she was asked by the then ruling CPI(M) government to leave, and has been living in the Capital since then.

"I chose to live here and specially as a Bengali writer I decided to live in Kolkata. I needed a Bengali environment and was very happy when I settled there in 2005.

"The government and I started facing problems three and a half years later and I was forced to leave the state," she claimed.

The writer had penned her struggles from her time in exile in her book, Nirbashan, which has now been translated from Bengali into English as Exile.

In the book, she mentions the series of events during her seven-month struggle leading to her ouster from West Bengal, then Rajasthan and eventually India.

She also talks about the "anxious" days that she spent under house arrest.

"There were days when I had high blood pressure and wanted to see a doctor but because of security reasons, I was not allowed to do so. I was even asked how much money I needed to leave the country," she said.

Expressing concern over how more and more parts of the globe are becoming autocratic, she said the world was becoming a difficult place for writers to speak their minds.

"When writers like me are attacked here, we go to Europe. Now even Europeans have started having problems (Charlie Hebdo attack), so where do we go now?" she said.

She also called for a consolidated fight against the 'misogynist' mindset prevailing in society to "make the world a better place to live in".

"If we want to change society we have to fight fundamentalists because they want to pull society backwards. I write for human rights, women's rights and freedom of expression.

"For a change I think we should fight misogyny and religious fundamentalism, otherwise it won't be a better place to live."