Section 144 Seems to be Imposed Only for Hindus, not Muslims, Says BJP On West Bengal Communal Clash 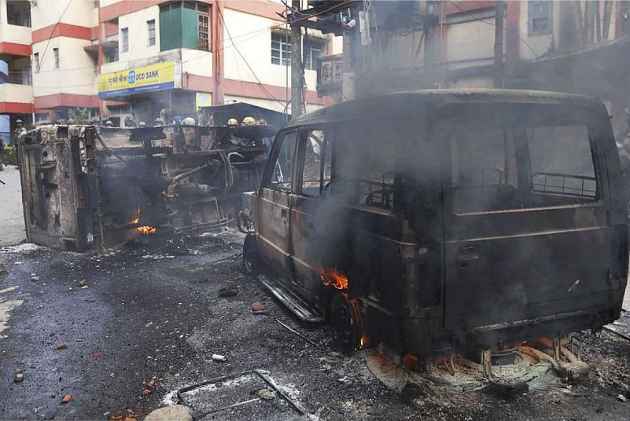 Print
A
A
A
increase text size
Outlook July 07, 2017 12:40 IST Section 144 Seems to be Imposed Only for Hindus, not Muslims, Says BJP On West Bengal Communal Clash

The Bharatiya Janata Party (BJP) on Friday slammed the West Bengal Chief Mamata Banerjee asserting that section 144 seems to be imposed only for Hindus and not for Muslims because the police are investigating the matter only with Hindus not Muslims who are actually creating the rift.

Speaking to ANI, BJP leader Rahul Sinha said, "The communal violence which is growing day by day never seems to come to an end. The police seems to be acting like a spectator among all the chaos which is occurring in the state, because they are not been given orders to control the situation. Section 144 seems to be imposed only for the Hindus; not for the Muslim because when the police are investigating this matter they are questioning only the Hindu not the Muslims who are actually creating the rift. It's sad to say that, this government is totally unable to administer the law and order situation in the state".

Echoing similar views, another saffron leader Sudhanshu Trivedi stated that instead of controling the situation TMC is more involved in putting allegation on others.

"Whatever is happening in West Bengal since several days is definitely condemnable and a serious concern. This is nothing but a result of a consistent lopsided communal politics derived by their vote bank politics of the ruling party of West Bengal. Instead of giving proper attention to control the situation the government is more involved in putting allegation on others including the Governor," Trivedi said.

Yesterday, the BJP said that Mamata Banerjee is unable to administer the law and order situation in the state, and therefore, they would demand her resignation.

BJP leader Kailash Vijayvargiya said the anti-social elements are working as TMC workers in the state and creating chaos, especially in the Hindu-dominated areas.

Using the opportunity to target Mamata over her remarks against state Governor Keshari Nath Tripathi, Vijayvargiya said she is making such comments out of frustration.

Mamata had earlier alleged the state governor of abusing and threatening her. She also said that the Governor's office was behaving like a ' Bharatiya Janata Party (BJP) office.'

Meanwhile, BJP president Amit Shah has constituted a team comprising party leaders Om Mathur, Meenakshi Lekhi, Satyapal Singh and Kailash Vijayvargiya, who will visit the violence-affected areas and will submit a report to him.

West Bengal, in the recent few days, has witnessed violence and serious clashes either taking place between two religious groups or between people and the administration.

The boiling pot of it is the Darjeeling unrest, with the Gorkhas, under the Gorkha Janamukti Morcha (GJM), demanding a separate Gorkhaland for themselves.

The situation is still intense in the region with the widespread shutdown entering the 22nd day today. Another incident of violence which erupted was in the North 24 Parganas area on Monday.

Earlier, Mamata had appealed the warring groups to maintain peace and communal harmony in the area. She also held the local police responsible for failing to block Facebook in the beginning only. (ANI)