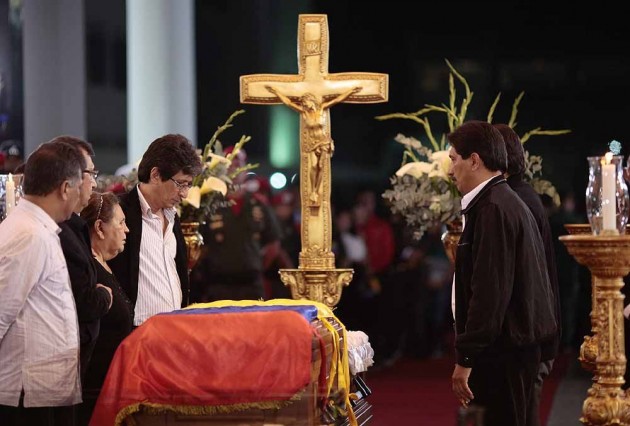 outlookindia.com
-0001-11-30T00:00:00+0553
A huge line of Venezuelans filed past the remains of late President Hugo Chavez today, crying, making the sign of the cross and giving military salutes as an era ended and uncertain elections loomed in the oil-rich nation.

Chavez lay in state in a half-open casket in the Caracas military academy, with a serene face, wearing olive green military fatigues, a black tie and the iconic red beret that became a symbol of his 14-year socialist revolution.

Thousands of people stood in line through the night outside the academy to see the former paratrooper whose oil-funded socialism earned him friends and foes at home and abroad.

"He's in there, but my comandate is immortal," said Saul Mantano, a 49-year-old salesman with a Chavez hat and a Venezuelan flag who saw the half-open casket. "I didn't want to see him dead, but it's a reality now."

The country gave Chavez a rousing send-off through the streets of Caracas yesterday, one day after he lost his battle with cancer at the age of 58, with a sea of people in red shirts throwing flowers on his coffin.

At the front of the procession was his chosen successor, Vice President Nicolas Maduro, the interim leader who walked the seven-hour march to the academy and is now on a path to elections in the next 30 days.

His mentor now lay in state in a half-opened casket in the hall of the academy where he found his political calling, inspiring the former colonel to lead a failed coup in 1992 before being elected in 1998.

"Maduro is already our president. It's what Chavez wanted and we will vote for him when elections come," said a mourner, Margarita Martinez, 37.
Continue FREE with Ads Pay Rs. 1 to Read Without Ads
READ MORE IN:
Hugo Chavez International
Next Story : Karuna Slams Lanka's 'Autocratic Activities'
Download the Outlook ​Magazines App. Six magazines, wherever you go! Play Store and App Store