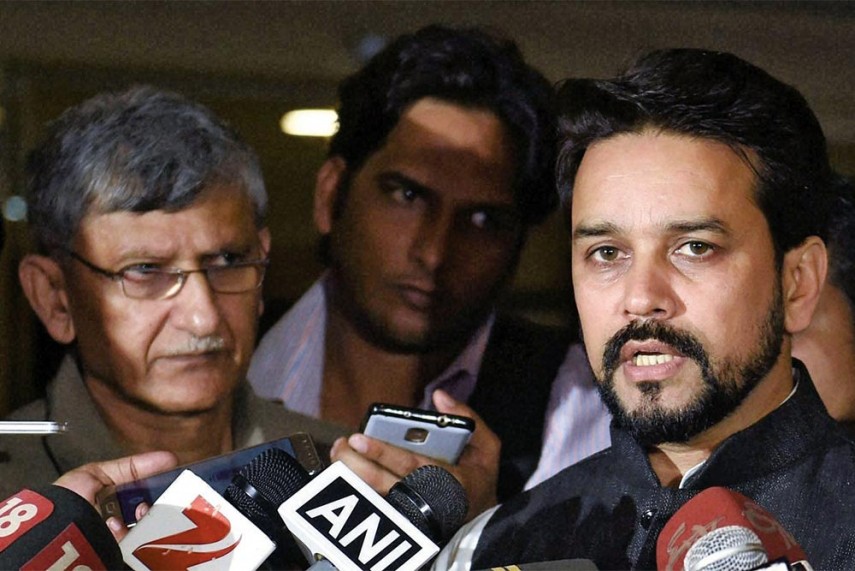 Tightening its noose around the embattled BCCI, the Supreme Court today choked funds to the state associations till its top boss Anurag Thakur and the units "undertake to implement" the Lodha committee recommendations on reforms.

The apex court, in a slew of directions, sought appointment of an "independent auditor" to "scrutinise and audit" the income and expenditure of the cash-rich body besides going into high-value contracts awarded to various entities awarded by it.

"BCCI shall forthwith cease and desist from making any disbursement of funds for any purpose whatsoever to any state association until and unless the state association concerned adopts a resolution undertaking to implement recommendations of the Committee as accepted by this Court in its judgement dated 18 July 2016.

"After such a resolution is passed and before any disbursement of funds takes place to the state association concerned, a copy of the resolution shall be filed before the Committee and before this Court, together with an affidavit of the President of the state association undertaking to abide by the reforms contained in the report of the Committee, as modified by this Court," a bench comprising Chief Justice T S Thakur and Justices A M Khanwilkar and D Y Chandrachud said.

The bench said that any transfer of funds "shall take place to the state associations" only after they accept terms and comply with them.

The bench directed Thakur and BCCI Secratary Ajay Shirke to file separate "affidavits of compliance" before the court on or before December 3, 2016 in terms of the earlier order.

Vesting the right to appoint "independent auditor" on the Lodha panel, the court said the auditor would "scrutinise and audit the income received and expenditure incurred by the BCCI" and "shall also oversee the tendering process that will hereinafter be undertaken by BCCI, as well as the award of contracts above a threshold value to be fixed by the Committee."

The bench, in its 21-page order, said that the Lodha panel would be at liberty to obtain advice of auditors on the "fairness of the tendering process which has been adopted by BCCI and in regard to all relevant facts and circumstances.

"The Committee will determine whether a proposed contract above the threshold value should or should not be approved," it said, adding "the Committee will be at liberty to formulate the terms of engagement and reference to the auditors having regard to the above directions."

The bench further clarified that the cricket body would "defray the costs, charges and expenses of the auditors".

The court gave two weeks time to the BCCI President and the Secretary to file affidavits indicating compliance made by the cricket body of those recommendations of the panel which have been complied with.

They will have to indicate about the "manner of compliance and the steps adopted for securing compliance with the remaining recommendations".

"They (Thakur and Shirke) shall appear before the Committee to explain the manner of compliance. The President and Secretary, BCCI shall also keep the Committee apprised about the steps taken pursuant to the statement recorded by them."

"Though BCCI is in default and breach of the directions of this Court, in order to enable it to have an additional opportunity to establish its bona fides and to secure compliance with the judgement of this Court dated July 18, 2016, we grant time until 3 December 2016 for the purpose," the bench said.

Besides complying with directions set out and appearing before the Lodha panel, BCCI shall report compliance before this court on December 5, the bench ordered.