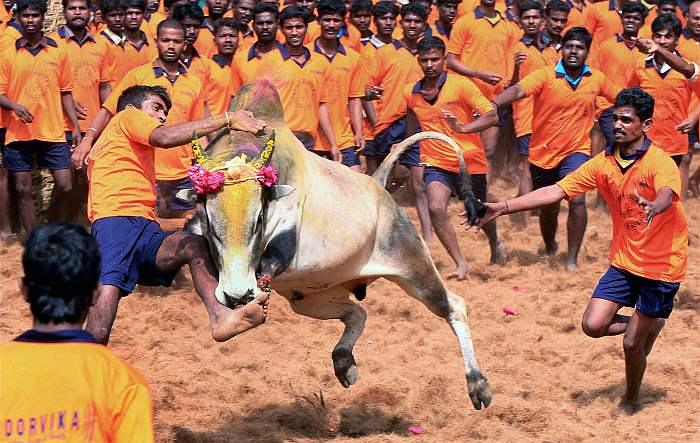 The Supreme Court has dismissed the Tamil Nadu government's plea seeking review of its 2014 verdict banning use of bulls for jallikattu events in the state and bullock-cart races across the country, saying that there was no connection of jallikattu with the right to freedom of religion under the Consitution.

A bench of justices Dipak Misra and R F Nariman observed that when a bull is "tamed" for the purpose of an event, "the fundamental concept runs counter to the welfare of the animal which is the basic foundation of PCA (Prevention of Cruelty to Animals) Act".

"We are unable to hold that there is any connection or association of jallikattu with the right of freedom of religion in Article 25," it said.

The apex court said there was a "frontal collision and apparent inconsistency" between the PCA Act and the Tamil Nadu Regulation of Jallikattu Act, 2009.

"It is inconceivable that a bull which is a domestic animal should be tamed for entertainment and a wide ground can be put forth that it is not a ticketed show, but meant for celebrating the festival of harvest.

"Such a celebration for giving pleasure to some, both the participating and the people watching it is such an act that is against the welfare of animals and definitely amount to treating the animal with cruelty," the bench said.

It also dealt with the arguments advanced by senior advocate Shekhar Naphade, appearing for Tamil Nadu, who had said that every festival has the root in religion and when jallikattu is an event that takes place after harvest, it has religious flavour and such an ethos cannot be disregarded.

"Though the aforesaid argument is quite attractive, we have no hesitation in saying that such an interpretation is an extremely stretched one and inevitably result in its repulsion and we do so. Such kind of imaginative conception is totally alien to the fundamental facet of Article 25 and, therefore, we are compelled to repel the submission," it said.

"In view of the aforesaid analysis, we do not perceive any merit in this review petition filed by the State of Tamil Nadu and, accordingly, it stands dismissed," the bench said. (More) The apex court had on January 21 dismissed similar pleas for re-examination of the 2014 judgement.

The court, during in-chamber proceedings, had dismissed the review petitions filed by some residents of Tamil Nadu seeking reconsideration of the ban order on the controversial bull-taming sport.

On January 8, the Centre had issued a notification lifting the ban on jallikattu in Tamil Nadu with certain restrictions, which was challenged in the apex court by Animal Welfare Board of India, People for Ethical Treatment of Animals (PETA) India, a Bangalore-based NGO and others.

The apex court had stayed the notification. Jallikattu, also known eruthazhuvuthal, is a bull-taming sport played in Tamil Nadu as a part of the Pongal harvest festival.

The court in its 2014 judgement had said that bulls cannot be used as performing animals, either for jallikattu events or bullock-cart races in the states of Tamil Nadu, Maharashtra or elsewhere in the country and banned their use across the country.

The apex court had declared Tamil Nadu Regulation of Jallikattu Act, 2009 as constitutionally void, being violative or Article 254(1) of the Constitution.