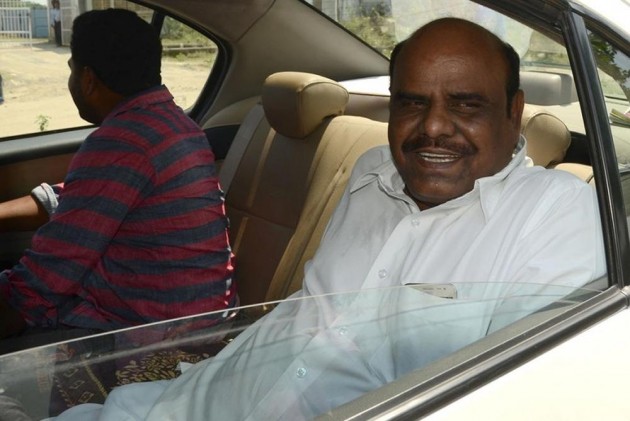 Controversial Calcutta High Court judge Justice C S Karnan today appeared before the Supreme Court which granted him four weeks' time to respond to the contempt notice while rejecting the submission that his administrative and judicial powers be restored.

Karnan is said to have been characteristically defiant during the hearing. He told ANI that he would pass an order against the seven-judge SC bench. When asked if it was within his power to do so, he reportedly said: "Yes, I do".

The seven-judge bench declined Karnan's plea to continue with his work. An NDTV  report says Karnan dared the judges to send him to jail in the case, saying: "I am not a terrorist or anti-social person."

A seven-judge bench headed by Chief Justice J S Khehar took note of personal appearance of Justice Karnan, a first in the history of Indian judiciary, and asked him to respond to the allegations leveled against various judges in his several communications.

At the outset, the bench, also comprising Justices Dipak Misra, J Chelameswar, Ranjan Gogoi, M B Lokur, P C Ghose and Kurian Joseph asked Justice Karnan as to whether he was willing to tender an unconditional apology and withdraw his earlier communications in which he had made allegations against various judges.

As Justice Karnan was not forthright in his response, the bench suggested him to take time and legal assistance in responding to the question.

Justice Karnan in his response, alleged discrimination and "social boycott" by companion judges on various grounds including his caste and said that even the Supreme Court issued the contempt notice and took away his administrative and judicial rights without hearing him.

"I made complaints to the Chief Justice of India and the Prime Minister. A suo motu contempt proceeding was initiated against me. Before hearing me, my work was withdrawn. My dignity has been hurt in the eyes of general public. I am also holding a Constitutional position. Do I have any respect, or dignity?" Justice Karnan said.

He said police officials had entered his office to serve the warrant and since he is a sitting judge holding a Constitutional office, "the insult is not only to me, but to the entire judiciary".

To this the bench said that earlier, it had issued notice to Justice Karnan and when he failed to appear before it then only it issued a bailable warrant against him.

"When we had issued notice to you, it was served. You did not enter appearance. It is a normal procedure. You did not appear that's why bailable warrant was issued. We are not saying you are an accused. Despite being a judge and understanding all the consequences, you did not appear," the bench told Justice Karnan.

The apex court had on March 10 issued bailable warrants against Justice Karnan to ensure his presence before it in the contempt case.

The bench headed by Chief Justice had taken strong note of Justice Karnan's non-appearance despite being served with the contempt notice and had asked the Director General of West Bengal Police to execute the warrants on the judge to ensure his presence today.

The apex court had on February 8 asked Justice Karnan to appear in person and explain why contempt proceedings not be initiated against him. It had restrained him from undertaking judicial and administrative work.

However, Justice Karnan did not appear before the apex court on February 13 also.

He had written a letter to the apex court on February 10 in which he had reportedly played the Dalit card asking the Supreme Court to refer the matter to Parliament, contending that contempt proceedings were "not sustainable".