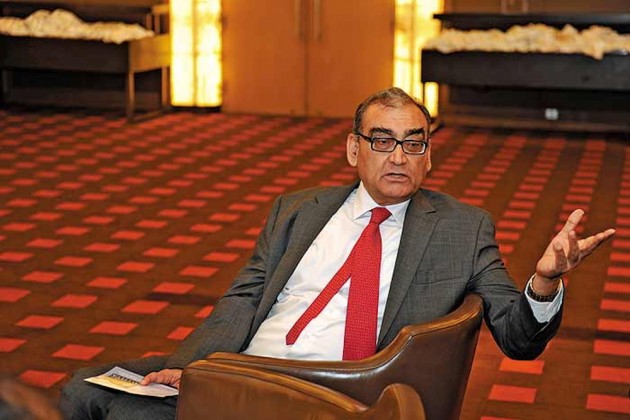 In an unprecedented action, the Supreme Court today issued notice of contempt to its former judge Markandey Katju for using "intemperate" language and "scandalising" judiciary as he appeared before a bench and had heated exchanges with it.

A bench comprising justices Ranjan Gogoi, P C Pant and U U Lalit said Katju's statement in a recent blog constituted a serious assault on judges and not on the judgement and therefore the notice of contempt to him.

Katju protested against the decision saying the judges were threatening him and it was not proper for them to behave in such manner with a former judge of the apex court.

"I am not scared of it. Don't give me threat," the former judge remarked as Justice Gogoi pronounced the order in a surcharged atmosphere.

Justice Gogoi warned him saying "don't provoke us any more" to which Katju said "you are provoking me by this type of threat. You requested me to come here and assist you."

At this point, Justice Gogoi asked, "is there somebody to escort Justice Katju (out)". Katju replied, "What is this behaviour. On your request I came here. Is this the way I am to be treated."

However, the Bench continued with the dictation of the order saying that prima facie the statement (of Katju) constituted a serious assault on judges and not on judgement. Therefore a notice of contempt."

The issue of contempt was raised after the bench had dismissed the review petitions filed by Kerala government and mother of Soumya challenging the acquittal of the convict of the murder charge.

Justice Katju was summoned as he in his blog had claimed that there was error in the judgement acquitting the accused for the murder and he was asked to assist the bench during the hearing of the review petition.

Addressing Justice Ranjan Gogoi, Justice Katju said a Supreme Court judge should not behave like this and it was like a threat to him.

"Don't try to be funny with me. I came on your request. Don't treat me like this," he said after Justice Ranjan Gogoi pronounced the order as to why a contempt proceeding be not initiated against him for scandalising the judiciary. (More) The Supreme Court issued notice after taking the view of

Attorney General Mukul Rohatgi who was shown a copy of the blog which he described as "scandalous".

Taking note of this, the Bench said "we are issuing notice of contempt". Taken aback Rohatgi said his view was restricted only to the underlined portion of what he was shown as he had not read the entire blog.

"I am changing my position and I am reading the entire page. The underlined portion is intemperate and nothing beyond," he said.

When the Bench pointed to the other part of the Katju's blog which was not underlined by it, Rohatgi said the second one is also intemperate. Justice Katju repeatedly said he has appeared before the Bench and it should not have threatened as he was also a senior to the judges on the bench.

However, before taking up the contempt issue, Justice Katju along with the Attorney General assisted the Bench and tried to show how the judges have gravely erred in acquitting the convict of the murder charge.

Katju said that the judges have not applied "common sense" in arriving at a decision that the victim was pushed to death as she jumped out of a slow-running train in a semi- conscious state after the convict had inflicted head injuries on her.

The court had last month asked Justice Katju to appear and debate his Facebook post criticising the judgement by which the accused had escaped gallows in the Soumya rape case in which he was acquitted of murder charge.

The court had asked Justice Katju to appear in person before it to point out the "fundamental flaws" as claimed by him in the sensational Soumya rape case.

Subsequently Katju tweeted that he would be appearing before the court for the hearing on the review plea in the case.

Experts had said it was for the first time that the Supreme Court has asked its former judge to appear in person before it in connection with any matter.

In his Facebook post, Justice Katju had criticised the apex court saying it had grievously erred by "not holding" the convict, Govindachamy, "guilty of murder" in the case.

While issuing notice to Justice Katju, the bench had also quoted his Facebook post criticising the Soumya case verdict, which said "It is regrettable that the Court has not read section 300 carefully. The judgement needs to be reviewed in an open court hearing".

In another post on the same issue, Justice Katju had written "I submit that the Supreme Court has erred in law in not holding the accused guilty of murder, and its judgement needs to be reviewed to this extent".

Justice Katju, through his Facebook post on September 15, had criticised the verdict commuting to life the death sentence awarded to Govindachamy for raping 23-year-old Soumya on February 1, 2011, after pushing her out of a train in Kerala.

Following the apex court order, the state as well as Soumya's mother had filed review petitions.