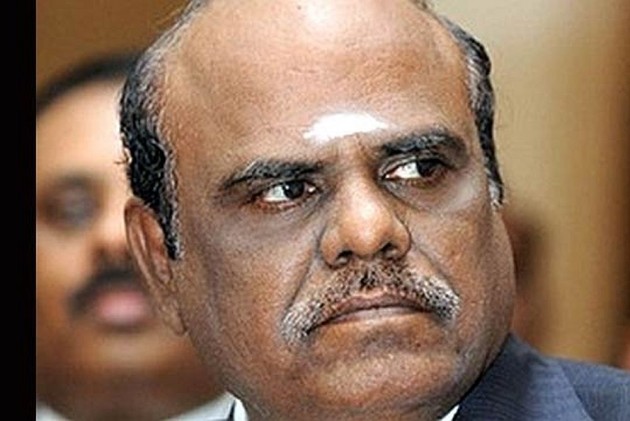 Print
A
A
A
increase text size
Outlook March 10, 2017 11:35 IST SC Issues Bailable Warrant Against Justice Karnan For Failing to Appear Before Court in Contempt Case

In an unprecedented order, the Supreme Court today issued an arrest warrant against serving Calcutta High Court judge C S Karnan to ensure his presence before it on March 31 in a contempt case.

"There is no other alternative to seek presence of Shri Justice C S Karnan. We issue bailable warrants of the sum of Rs 10,000 in the nature of personal bond to the satisfaction of the arresting officer," a seven-judge bench headed by Chief Justice J S Khehar said.

The bench directed the West Bengal Director General of Police to personally execute the arrest warrant on Justice Karnan to ensure his presence before it on March 31, the next date of hearing.

The bench, also comprising Justices Dipak Misra, J Chelameswar, Ranjan Gogoi, M B Lokur, P C Ghose and Kurian Joseph, refused to consider a communication, written to apex court registry on March 8, as his response to the notice issued against him earlier.

At the outset, Attorney General Mukul Rohatgi said that Justice Karnan had defied the Supreme Court order and the apex court rules on contempt provide for issuance of bailable warrants against a contemnor to ensure his presence.  The apex court said that the Supreme Court registry has received a fax from Justice Karnan on March 8 in which he had discussed certain administrative issues.

The bench, however, refused to consider the March 8 communication as a response of Justice Karnan on the contempt notice observing that it reflected allegations "on certain named judges".

Read Also: All You Need to Know About Justice C.S Karnan, Who Now Faces Contempt Charge By the Supreme Court

The apex court had on February 8 asked Justice Karnan to appear in person and explain why contempt proceedings should not be initiated against him. It had restrained him from undertaking judicial and administrative work.

However, Justice Karnan failed to appear before the apex court on February 13.

On February 10, Justice Karnan had written a letter to the apex court in which he had reportedly played the Dalit card asking the Supreme Court to refer the matter to Parliament, contending that contempt proceedings were "not sustainable".

During the last hearing, senior advocate K K Venugopal, appearing for the Registrar General of the Madras HC, had said the High Court judges needed protection from Karnan's verbal abuse and wild charges.