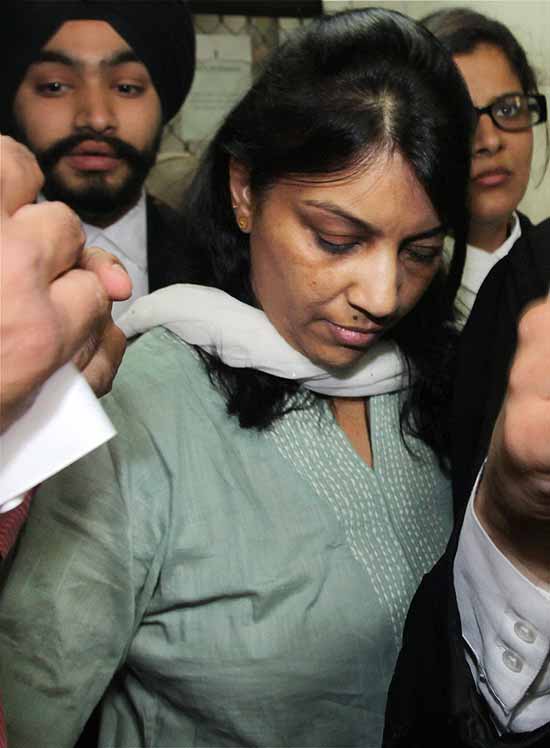 outlookindia.com
-0001-11-30T00:00:00+0553
Dentist Nupur Talwar today failed to get any relief from the Supreme Court, which refused to stay the non-bailable warrant (NBW), issued against her by a special Ghaziabad court for evading it to face trial in the twin murder case of her daughter Aarushi and domestic aide Hemraj.

A bench of justices A K Patnaik and J S Khehar directed Nupur Talwar to surrender on Monday before the trial court, which was asked to consider her bail plea expeditiously.

"We are not inclined to stay the operation of the order of NBW issued by the Special Judge, Ghaziabad. But we direct that petitioner (Nupur Talwar) will appear on Monday and move her bail.

"In case application for bail is moved, the same shall be considered expeditiously," the bench said.

Senior counsel Mukul Rohatgi pleaded to the apex court to grant her bail or consider her bail plea immediately as she apprehended arrest after surrendering before the trial court.

The bench, however, was not impressed with the argument and said the petitioner ought to follow the formalities.

The bench pointed out that even her husband was granted bail by the trial court.

"If you don't get it (bail), you can approach the higher forums," the bench remarked.

The slain school-going teenager Aarushi's mother Nupur faced arrest after Ghaziabad special court issued non-bailable warrant against her on April 11 following which the CBI had carried out searches at her Delhi home.

The special CBI court had issued the warrant against Nupur Talwar for failing to appear before the court in Ghaziabad and directed that she be produced before it.

The order was given on the plea by the CBI seeking issuance of warrant against Nupur, who was not appearing before the court despite directions.

Nupur's husband Rajesh Talwar, who appeared before the court, had requested it to grant time to her, but the CBI opposed it and sought issuance of NBW against her.

Dentist couple Rajesh and Nupur Talwar's sole daughter 14-year-old Aarushi had been found dead at their Noida house on the night intervening May 15 and 16, 2008.

The body of their servant Hemraj was found on the terrace of the house the next day.

Nupur had earlier moved both the Allahabad High Court and the Supreme Court but had failed to get any relief. The high court had also denied her relief from arrest.