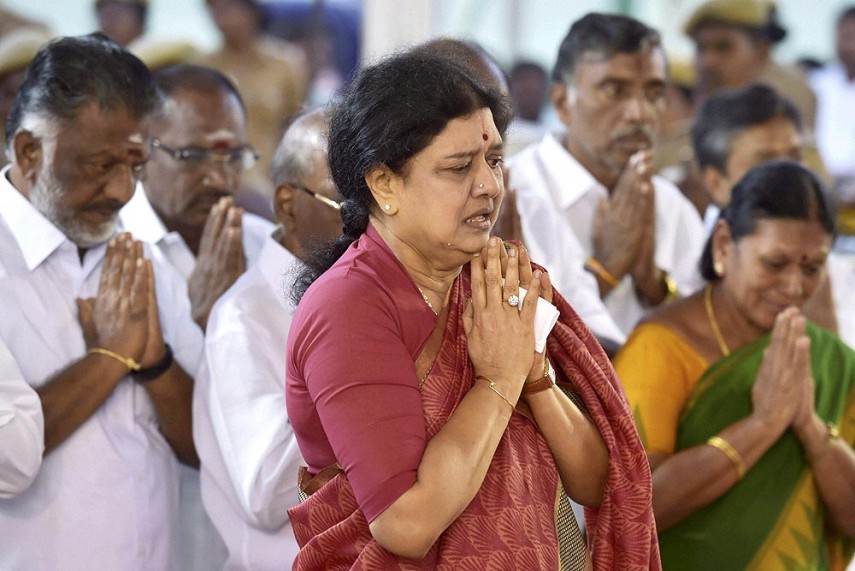 "We do not intend to pass any order on this. We are not going to change anything in the judgement," a bench headed by Justice P C Ghose said.

"Sorry. We have already written everything in the fatty judgement and it says forthwith. I am not going to change even a word," the bench said.

Senior advocate KTS Tulsi, appearing for Sasikala, said that the leader wanted some time to surrender as she has to manage her affairs.

He was seeking urgent hearing of the application today itself.

The bench instead of listing the plea, made clear to the lawyer that it would not consider the plea.

Yesterday, the apex court had upheld the trial court verdict awarding four years jail term to the convicts in the case, besides imposition of a fine of Rs 10 crore each on Sasikala and two others.

The trial court had imposed a fine of Rs 100 crore on the late Jayalalithaa.

During the brief hearing today, the bench said that the word 'immediately' has been used in the judgement with regard to the surrender of the convict.

"I hope you (Tulsi) understand the meaning of the word 'immediately'," Justice Ghose said.

60-year-old Sasikala will have to serve a jail term of around 3-and-half years out of the 4 years awarded by trial court as she has already undergone almost six months in prison.

In its 570-page judgement, the apex court had dashed her ambition to become the Tamil Nadu CM by holding her guilty of conspiring with late AIADMK supremo J Jayalalithaa and "restored in toto" the trial court's decision in the case.

The trial court had found disproportionate assets worth Rs 53.60 crore, which Jayalalithaa and the three others could not account for. The CBI had alleged that the unaccounted wealth was in the tune of Rs 66.65 crore.

The top court had directed Sasikala and her two relatives --V N Sudhakaran, Jayalalithaa's foster son, and Elavarasi, widow of Sasikala's elder brother, to "forthwith surrender" before the Bengaluru's trial court which will "take immediate steps" to ensure that they all "serve out the remainder of sentence awarded to them and take further steps in compliance of this judgement, in accordance with law."

Sasikala, the close aide and shadow of Jayalalithaa for almost three decades, had been in the jail in 1996 when the case was registered and later in 2014 after the Special trial court convicted and awarded a four-year sentence with a fine of Rs 10 crore. Jayalalithaa was then awarded four-year jail term, besides a fine of Rs 100 crore.

The proceedings against Jayalalithaa were abated as she breathed her last on December 5 last year.