SC Asks Cops Not to Take Coercive Action Against Taslima 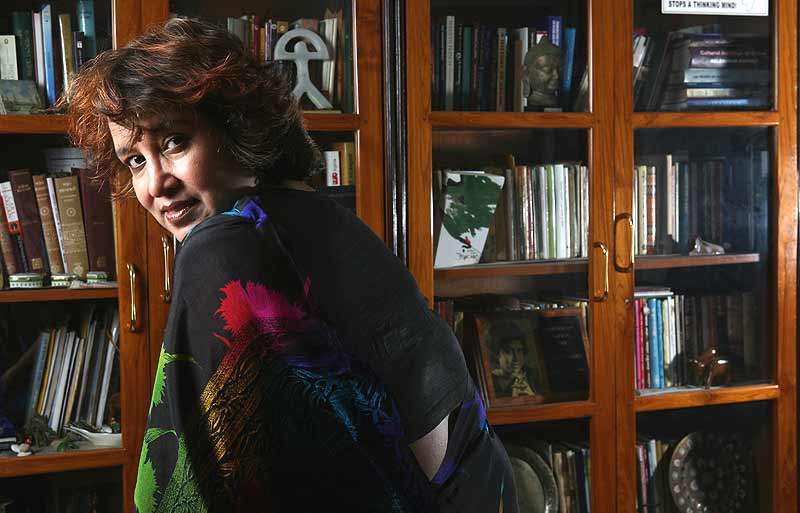 Print
A
A
A
increase text size
Outlook December 17, 2013 13:21 IST SC Asks Cops Not to Take Coercive Action Against Taslima

In a relief to controversial Bangladeshi author Taslima Nasrin, the Supreme Court today asked Uttar Pradesh Police not to take any coercive action against her in connection with an FIR lodged by Muslim cleric Maulana Tauqeer Raza Khan alleging that her twitter posts insulted "religious" beliefs.

"Issue notice. In the meantime, no coercive action be taken," a bench headed by Justice B S Chauhan said after brief arguments advanced by senior advocate K K Venugopal on behalf of the author that the issue pertains to human rights and her interest be safeguarded.

Seeking response from UP administration, the bench, however, made it clear that so far as the quashing of FIR is concerned, this plea cannot be entertained at this stage.

It also said that the plea seeking scrapping of Section 66A of the Information Technology (IT) Act can be clubbed with other similar pleas which are pending hearing in the apex court.

Section 66 (A) of the IT Act provides for arrest of a person hurting the sentiments of others through offensive remarks or information through electronic media, including social networking sites.

During the hearing, Taslima's advocate said that an FIR has been lodged without any preliminary enquiry by UP Police on a complaint based on a news report.

"The FIR has been lodged by a person who has issued a fatwa, putting Rs five lakhs as bounty on my head," he said.

Referring to the contents of the FIR, he said her twitter posts were related to the meeting of Aam Aadmi Party convenor Arvind Kejriwal with Khan for seeking support of Muslims in the elections.

"Why did he (Kejriwal) go to a person who had issued a fatwa against me for seeking support. He did not go to common Muslims," the counsel said.

The court, which said it may consider any plea seeking transfer of the case outside Uttar Pradesh, has now fixed the matter for further hearing in the second week of January.

Taslima in her plea said she feared that the "draconian" provision will be "misused" against her.

The author, who had got irked by the meeting of Kejriwal with Khan, had posted some comments on her twitter account.

A news report in a vernacular daily, based on her twitter posts, formed basis of the FIR lodged by Khan at Kotwali Police Station at Bareilly under section 295A (maliciously insulting the religious beliefs) of IPC and section 66A of IT Act.

The Bangladeshi author, who has been living in self-exile for over 19 years, has apprehended the misuse of the IT Act provisions against her also.

"In the present case, the petitioner is herself a hapless victim and her case is a glaring example of the kind of abuse and misuse which is to be expected given the vague, wide and wholly unguided language of section 66A. It highlights the serious threats to the constitutional and human rights posed by the provisions such as section 66A of IT Act...", it said, adding her plea be clubbed with other similar petitions.

Seeking quashing of the FIR, the plea said that it has been lodged without any "preliminary inquiry" by the UP Police which relied on a news report, which summarised some of her twitter posts.

Taslima said that earlier, complainant Khan had announced a cash reward of Rs five lakh in 2007 on her head for her pro-women comments and no action was taken despite the fact that the incident was publicised.

"The petitioner is left with no alternative except to approach this court to seek relief against the motivated and malicious FIR against her, as well as against the rather draconian statutory provision which acts as an easy and ready aid for such abuse of the legal process," it said.

While expressing its difficulty in passing an order for quashing the FIR against Nasrin, the bench said, "Our difficulty is about interfering with the investigation.

"We understand the threat to your life. You should apply for police protection. Why should we stop the investigation. The investigation cannot be stayed," the bench observed.

Venugopal was arguing that the Bangladeshi author should be given protection from summons to go to Bareilly for questioning.

He said since the fatwa (diktat) issued in 2007 against her has not been withdrawn and the bounty of Rs five lakh has been put on her head, the fresh FIR would compel her to go to Bareilly.

However, the bench said, "If that is a problem, this problem could be solved by grant of protection but the FIR cannot go."