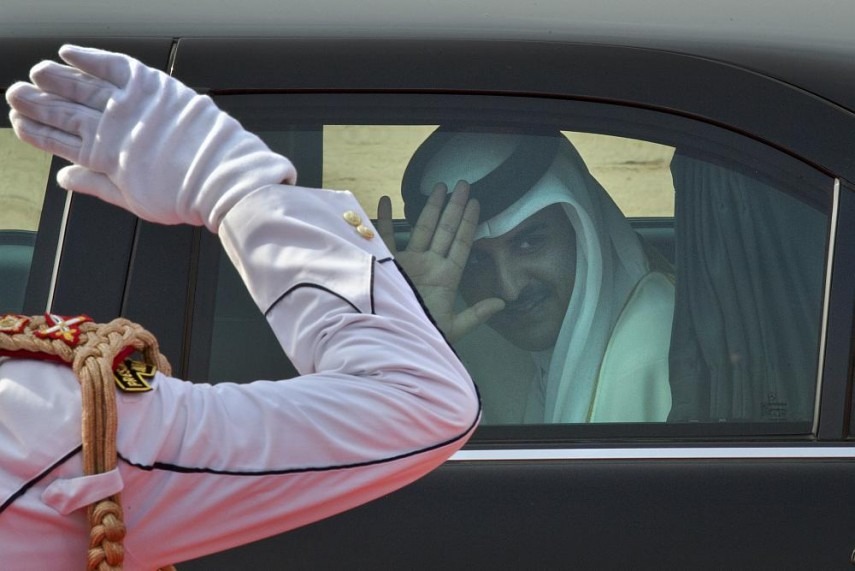 Saudi Arabia said today it is reopening its border with Qatar to allow Qataris to attend the hajj amid a monthslong rift between the neighbouring countries that led to both sides trading accusations of politicising the ritual.

The decision came after Saudi Crown Prince Mohammed bin Salman held a surprise meeting with a Qatari royal family member whose branch of the family was ousted in a palace coup in 1972.

Qatar's Foreign Minister Sheikh Mohammed bin Abdulrahman Al Thani said he welcomed the Saudi decision, but that the measures must also include a full lifting of the blockade. He was responding to questions at a press conference in Sweden today.

The official Saudi Press Agency reported that Qatari pilgrims will be allowed to enter the kingdom by land and that pilgrims would then be flown onward from two Saudi airports in Dammam and al-Ahsa at the king's expense.

The king also ordered that aircraft from the country's flagship carrier be dispatched to Qatar's capital, Doha, to fly Qatari pilgrims to the Red Sea city of Jiddah â€” nearest to Mecca, and to host them at his expense for the hajj. Saudi state TV said already 100 Qataris had arrived at the border crossing today.

Sheikh Abdullah was quoted as telling the Saudi prince that the ties between the two countries "are brotherly relations rooted in history."

Saudi Arabia's crown prince responded in kind, emphasising the historical ties between the two royal families, according to the Saudi Press Agency.

It was not clear, however, in what capacity Sheikh Abdullah was representing the Qatari government during the meeting. His grandfather, father and brother were rulers of Qatar until a palace coup ousted his branch of the royal family in 1972.

The meeting in Jiddah was the first by a Qatari to Saudi Arabia since a tense political standoff erupted 10 weeks ago when the kingdom, the United Arab Emirates, Bahrain and Egypt severed ties with Qatar.

Qatar's National Human Rights Committee issued a brief statement Thursday responding to what it said were "reports in Saudi media" outlining the kingdom's measures for Qatari pilgrims. The statement noted that the agreement does not include allowing Qatar Airways flights carrying pilgrims.

The committee expressed its "satisfaction" with the decisions, but reiterated its demands that the hajj not be politicised and said the Saudi measures remain "unclear," particularly regarding the facilitation of hajj for foreigners residing in Qatar.

The committee also reiterated "calls for further measures to lift the siege entirely on citizens and residents of Qatar," the statement said.

Qatar's human rights committee had previously filed a complaint with the UN special rapporteur on freedom of belief and religion over restrictions placed on its nationals who wanted to attend the hajj this year.

Saudi Arabia's Foreign Minister Adel al-Jubeir said Qatar's complaint amounted to a "declaration of war" against the kingdom's management of the holy sites.

Despite the goodwill measure announced today, tensions remain. The quartet accuses the small Gulf nation of supporting extremists. Qatar denies the allegation and says the charges are politically motivated.

At issue is Qatar's support for Islamist opposition groups in the region, which Saudi Arabia, the UAE and Egypt view as a threat.

A top Emirati official, commenting on today's breakthrough, called on Qatar to "end its politicization of hajj." UAE Minister of State for Foreign Affairs, Anwar Gargash, also used the opportunity on Twitter to commend Saudi Arabia for the initiative to send planes.

Hundreds of thousands of pilgrims from around the world have already arrived in Saudi Arabia for the hajj, which begins late next week. Saudi Arabia prides itself on hosting millions of pilgrims annually at Islam's holiest sites in Mecca and Medina.