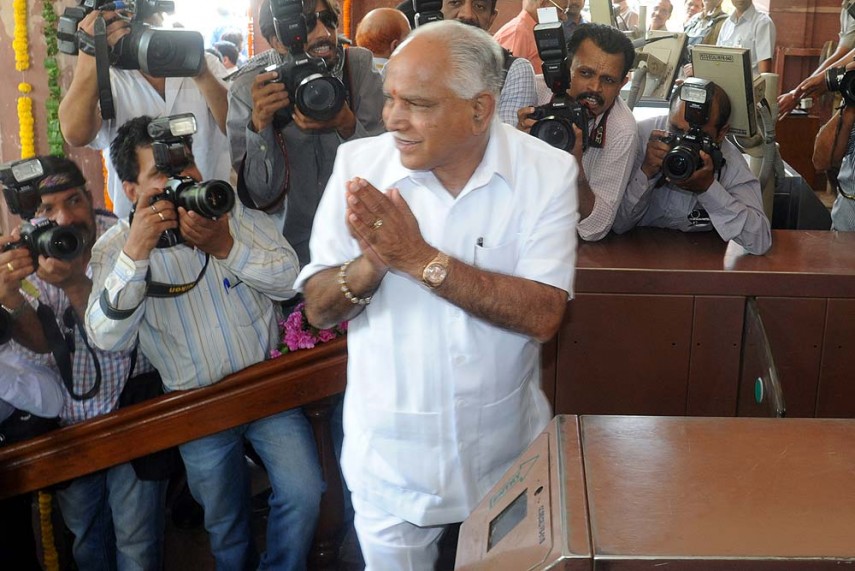 "I am happy that false allegations and politically motivated charges have been dismissed," the Karnataka BJP strongman told reporters, with the judicial pronouncement coming as a big political boost to him.

Yeddyurappa, appointed Karnataka BJP President in April this year to revive the party's fortunes, said the verdict had also given him a "new fillip" to bring the party back to power in the state, slated to go for assembly elections in 2018.

"Satyameva Jayathe. Justice is done. I stand vindicated," said Yeddyurappa in a tweet soon after the special CBI court pronounced the verdict with enthusiastic BJP workers celebrating it by bursting crackers and hailing him in the city civil court complex.

Judge R B Dharmagouder of the CBI court acquitted Yeddyurappa, his two sons and son-in-law in the Rs 40 crore kickbacks case related to illegal mining, which had led to his exit as chief minister in 2011.

"I have got relief... Lakhs of party workers are happy. I am very happy and satisfied," Yeddyurappa said, as the judgment brought a huge sense of relief to the Lingayat strongman who has been cleared of corruption in most of the cases but still faces several others in different courts.

Yeddyurappa, credited with guiding the party to form its first-ever government in the south in 2008, said, "This (the court verdict) has come as a great power for me to bring the BJP back to power in Karnataka..."

Lakhs of party workers were "relieved" by the judgement, which had also given him "great self confidence, he said.

Yeddyurappa's son B Y Raghavendra said "baseless" charges were made against their family with a "political motive."

Raghavendra, a member of the Assembly, said his family faced a "lot of pain" in the last five years but they have finally got justice which would help them further strengthen the party.

He said he was confident that BJP would come back to power in Karnataka under the leadership of Yeddyurappa.