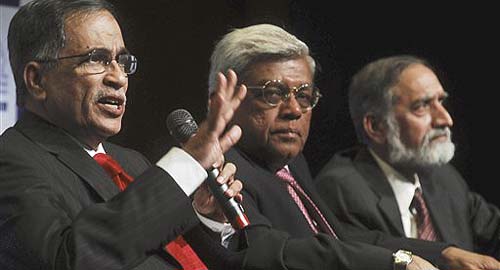 outlookindia.com
-0001-11-30T00:00:00+0553
The newly constituted board of scam-hit Satyam said it was looking for funds, for which it has opened a dialogue with lenders, to ensure salaries to employees and normal business operations, even as the search for a new CEO and CFO continued.

Meeting for the second time in a week on Saturday, the board named former Institute of Chartered Accountants (ICA) of India chief TN Manoharan as the internal audit committee of Satyam Computer Services Ltd.

Manoharan was entrusted with the responsibility after a meeting of the six-member Satyam board on Saturday. The board also decided to meet on a weekly basis to bring out the fraud-hit IT giant back on guard.

Noted legal firm Amarchand Mangaldas and Suresh A Shroff & Co has been appointed as the legal advisor of Satyam while Chennai based accounting and audit firm Brahmayya & Co have been appointed as internal auditors with immediate effect.

The audit committee will also include three board members - Manoharan, C Achutan and Suryakant Balakrishan Mainak.

The top agenda of the meeting was the funds needed by the company to pay salaries and meet other expenditure and on finding a chief executive officer (CEO) to run its day-to-day operations.

Satyam, India's fourth largest IT company, has been without a CEO and a group of senior staff members are running the show since January 7, when founder-chairman B Ramalinga Raju confessed to massive rigging of accounts and quit.

Raju, his brother B Rama Raju, who was Satyam's managing director, and the chief financial officer Vadlamani Srinivas have been arrested and sent to jail till January 23.

All the three have sought bail and a Hyderabad court will rule on their plea Monday.

Achutan, Parekh and Karnik were notimed to the reconstituted Satyam board on January 11 by the Union Government while Manoharn, Mainak and Das were nominated on Thursday (January 15)

Achutan is a former SEBI member and ex-presiding officer of Securities and Appellate Tribunal and Mainak is a nominee of the Life Insurance Corp of India (LIC).