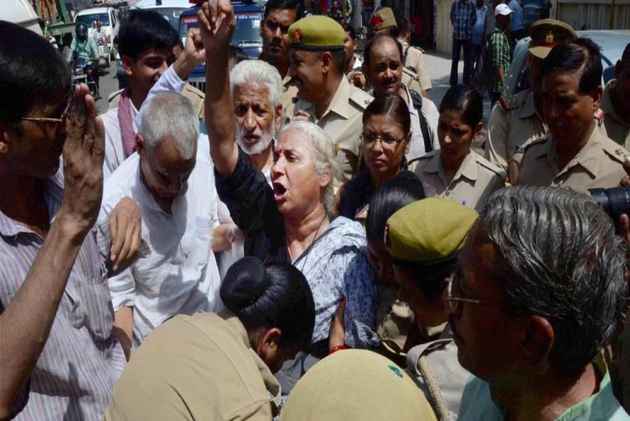 Narmada Bachao Andolan (NBA) leader Medha Patkar, AAP's Madhya Pradesh convenor Alok Agrawal and their supporters were on Wednesday detained from railway stations here before they could head for a protest in connection with the Sardar Sarovar Dam.

"Medhaji, me and our 20 colleagues were detained from the Bhopal main railway station. More than 100 persons, including the oustees of Sardar Sarovar Dam, were rounded up from Habibganj Railway Station here," Agrawal, who is also Aam Aadmi Party's (AAP) national spokesman told PTI over phone.

We have been taken to a ground near the jail, he said, adding, "the state government was trying to muzzle the voice of people who want to fight for their rights in a democratic manner."

"Medhaji and we just wanted to meet Madhya Pradesh chief minister Shivraj Singh Chouhan in the interest of around 1 lakh oustees of Sardar Sarovar Dam," he said.

Agrawal denied that they were on way to gherao the state assembly which is currently in session.

He said that 18,000 families in Madhya Pradesh's Alirajpur, Barwani, Dhar and Khargone districts are on the verge of drowning following the closure of the gates of the dam last month.

"These people in villages close to Narmada river have come under the submergence area of the dam water," Agrawal said.

"MP government has not rehabilitated these people yet. The Chouhan government has asked these oustees to quit the submergence area of the dam by July 31," he added.

"Now the people raising voices for the oustees are being rounded up," he added.

Bhopal Deputy Inspector General of Police (IGP) Santosh Singh said Medha Patkar and others were detained as they were heading for the state assembly which is currently underway.

They had also not informed the police of their programme or protest, the DIG added.