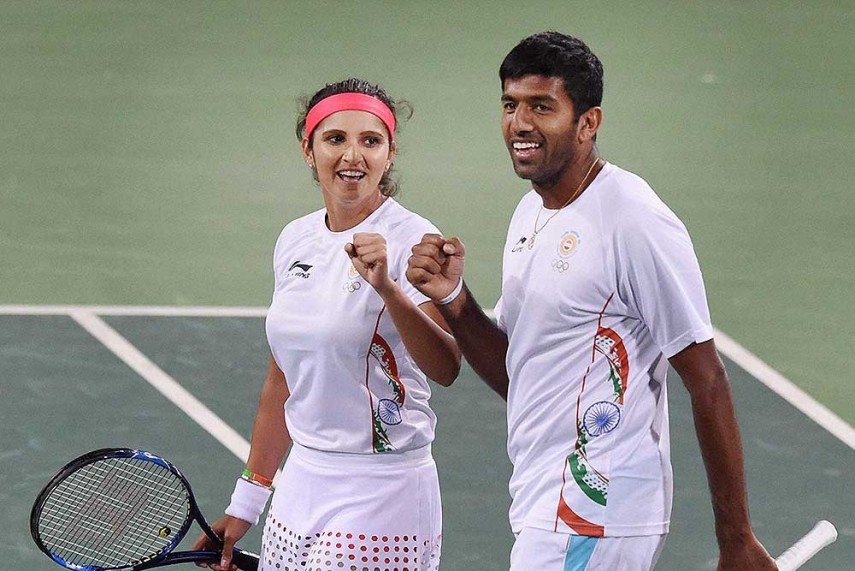 Sania Mirza and Rohan Bopanna suffered a sudden mid-match slump to fritter away a great opportunity as they lost the mixed doubles semifinal from a position of strength to Americans Venus Williams and Rajeev Ram here today.

After dominating the first set, Sania and Bopanna lost 6-2 2-6 3-10 to the Americans and will now fight for the bronze medal.

The Indians were cruising at one stage but once Sania's serve was broken in the fourth game of the second set, the tide turned in the favour of the Americans.

Bopanna's game also crumbled under pressure in the match tie-breaker. His strong serve deserted him and his ground strokes also fell apart when it mattered most.

Venus could not believe that they have won and continued jumping with joy and disbelief after the match was over.

Sania and Bopanna made a strong start as the Indians broke Venus at love in the third game to seize the initiative. Sania then served well to make it 3-1.

Powerful serves from the racquet of Bopanna meant that the Indians only conslidated the break. Bopanna's serves were almost untouchable. The Americans could not find the appropriate returns to his serve.

Venus again struggled and handed a breakpoint to the Indians after losing the forehand battle with Sania. That was saved but the Indians soon had a second chance which got converted when Venus buired a backhand to the net.

Sania served out the set in the eighth with Bopanna finding a cross court backhand winner, bisecting the two Americans.

Rajeev and Venus nosed ahead in the second set when Sania could not pull away her racquet from a Ram return that could have flown out of the courts. That was the second break chance of the game for the Americans.

That break of serve worked like a tonic for Venus and Rajeev as the Americans raced to a 5-2 lead in no time after that and forced a match tie-breaker by breaking the doubles world number one again in the eighth game.

The match-tie-breaker completely belonged to the Americans.