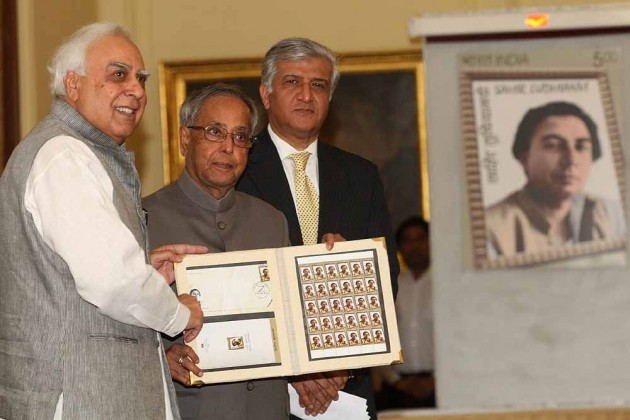 outlookindia.com
-0001-11-30T00:00:00+0553
Famous poet and lyricist Sahir Ludhianvi was remembered on his birth anniversary today with President Pranab Mukherjee releasing a commemorative postal stamp. The president said that Sahir continues to live, through his poetry and his songs, in people's hearts.

Speaking at a function at Rashtrapati Bhavan, Mukherjee noted that Sahir was widely acclaimed as a people's poet who wrote on the trials and tribulations of everyday life of the common man with great intensity and deep empathy.

"He was recognised as the poet of the young because of his writings on love and beauty. He wrote with great sensitivity on the values and social concerns of the contemporary period," he said.

Born as Abdul Hayee in Ludhiana in 1921, Sahir was known for his realistic lyrics in 1957-Guru Dutt's classic movie Pyaasa which challenged post-independence nationalistic atmosphere in the country through one his famous poem "jinhe naaz hai Hind par wo kaha hain."

At the function, Mukherjee said one of Sahir's greatest contributions was to converge Urdu poetry into film songs.

"He also fought for recognition for lyric writers through the Film Writers Association. The fact that his birth day is being commemorated 33 years after his death with the release of the stamp is proof that he lives - through his poetry and his songs – in people's hearts," he said.

Sibal recited some of the couplets penned by the late poet.