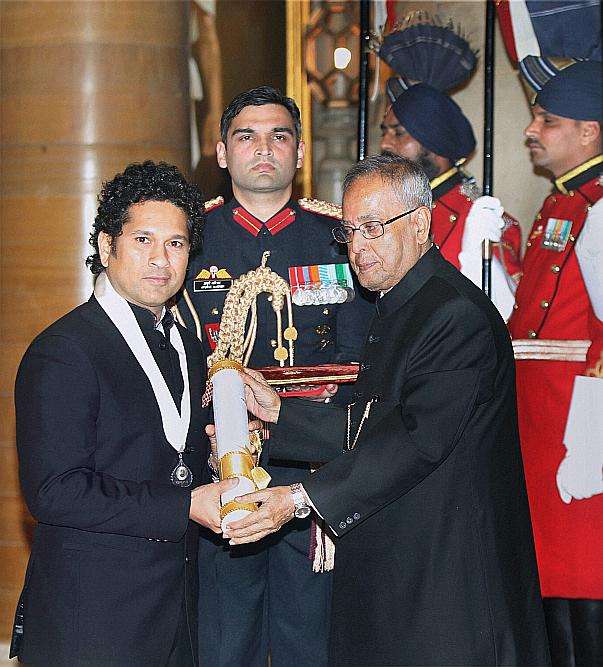 Tendulkar, 40, who retired from international cricket on November 16 last year, is the first sportsman to be bestowed with the honour.

He is the only sitting Rajya Sabha member to be conferred with Bharat Ratna.

Tendulkar, attired in a black bandhgala suit, exchanged pleasantries with Prime Minister Manmohan Singh, UPA chairperson Sonia Gandhi and other dignitaries at the investiture ceremony lasting a little over six minutes at the chandeliered Durbar Hall of Rashtrapati Bhavan.

It was attended by among others by Vice President Hamid Ansari, several Union ministers, Sachin's wife Anjali and daughter Sara.

"It is fantastic. It is more important than anything. Nothing compared to India honouring me," 79-year-old Rao told reporters after the award ceremony.

Rashtrapati Bhavan staff had a tough time controlling the gathering, many of whom wanted to shake hands with Tendulkar and take his autogragh on the booklet issued by the Home Ministry for the occasion.

Tendulkar and Rao, both of whom are recipients of Padma Vibhushan -- the country's second highest civilian honour, today joined a list of 41 eminent personalities who have been conferred with the award that is given in recognition of exceptional service of the highest order since it was instituted in 1954.

In a fitting finale to a record-breaking career spanning 24 years, Tendulkar, a former India Captain, was chosen for the prestigious award, after his farewell 200th Test against the West Indies in Mumbai on November 16, 2013.

An official statement had said Tendulkar has been a true Ambassador of India in the world of sports and his achievements in cricket are unparallelled, the records set by him unmatched, and the spirit of sportsmanship displayed by him, exemplary.

An outspoken scientist, Prof Chintamani Nagesa Ramachandra Rao is a well recognised international authority on solid state and materials chemistry who has published over 1,400 research papers and 45 books.

He is the third scientist after C V Raman and former President A P J Abdul Kalam to be conferred with the Bharat Ratna.

Prof Rao's contributions have been recognised by most major scientific academies around the world through conferment of memberships and fellowships and has been honoured with several national and international awards, the official announcement said.

He currently serves as the Head of the Scientific Advisory Council to the Prime Minister of India.

The Bharat Ratna was announced after a gap of four years with Hindustani music doyen Bhimsen Joshi being the last recipient in 2009.

Some of the notable personalities who have been conferred with Bharat Ratna in the past include Ustad Bismillah Khan in 2001, Bhimsen Joshi in 2009, Nobel Laureate Amartya sen in 1999, industrialist J R D Tata in 1992 and Nelson Mandela in 1990. The first Bharat Ratna was given to C Rajagopalachari, India's first Governor General and pioneering social reformer in 1954.