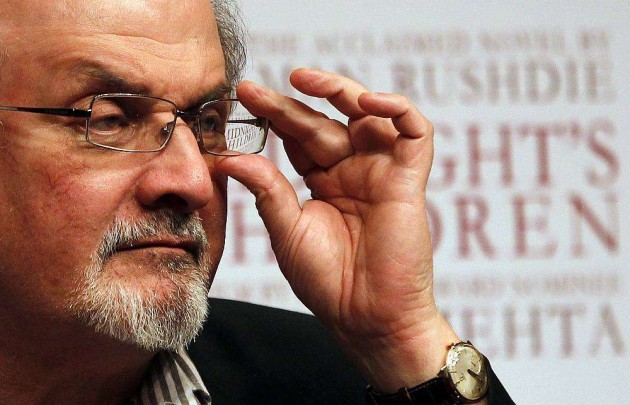 Print
A
A
A
increase text size
Outlook May 22, 2015 18:02 IST Rushdie, Ghosh Appeal to B'desh Govt to Punish Bloggers' Killers

outlookindia.com
-0001-11-30T00:00:00+0553
Open Letter to Bangladesh Prime Minister
Controversial author Salman Rushdie has joined fellow Booker Prize winners and celebrated writers like Amitav Ghosh and Margaret Atwood to appeal to Bangladesh government to do "all in its power" to punish the killers of three secular bloggers who were hacked to death recently.

More than 150 writers from around the world, including Mumbai-born Rushdie - whose work has angered Muslims around the world, have expressed their "grave concern" due to this "escalating pattern of violence against writers and journalists who are peacefully expressing their views".

Kolkata-born writers Ghosh and Neel Mukherjee besides novelist Rohinton Mistry are among the writers, who have called on the Sheikh Hasina-led government in Bangladesh in an appeal through The Guardian "to ensure that the tragic events of the last three months are not repeated, and to bring the perpetrators to justice".

They have added their names to an open letter that comes days after machete-wielding masked men hacked to death 33-year-old blogger Ananta Bijoy Das in Bangladesh in the third such attack by Islamists since February in the Muslim- majority nation.

Terror group Al-Qaeda in the Indian Subcontinent claimed responsibility for the brutal murder on a crowded street in Sylhet when Das was on his way to work.

Bangladesh-born US national Avijit Roy, 45, was the first victim of a deadly attack on "atheist bloggers" by the suspected Islamists this year when machete-wielding assailants attacked Roy and his wife in February.

A month after Roy's killing, another blogger Washiqur Rahman was murdered in similar fashion in Dhaka.

"Freedom of expression is a fundamental right under Bangladesh's constitution as well as one of the rights under the Universal Declaration of Human Rights," the open letter says.

"We call on the Bangladeshi authorities to swiftly and impartially investigate Ananta Bijoy Das's death as well as the murders of Avijit Roy and Washiqur Rahman Babu, and ensure that the perpetrators are brought to justice in accordance with international fair trial standards," it demands.

The writers also want that the Bangladeshi authorities "do all in their power to provide protection and support to bloggers and other writers at risk in Bangladesh, in accordance with Bangladesh's obligations under national and international law".

In this joint initiative from PEN International and English PEN, the authors express their shock and horror at recent developments, noting that "although there have been several arrests, no one has been held to account for any of these attacks".

Jo Glanville, director of English PEN, described the recent attacks as "a campaign of violence against bloggers and writers who are courageous enough to speak out in a hostile culture for free speech".

"The government of Bangladesh must urgently address the climate of impunity and be seen to safeguard freedom of expression," she said. "These shocking events have united writers throughout the world in an important show of solidarity."

Speaking to the London-based daily via email, Life of Pi novelist and Booker Prize winner Yann Martel explained that he added his name to the letter because of "the egregious nature of the offence. Something must be done urgently".

He said: "I also added my name for a more practical reason. The government of Bangladesh might be more subject to influence because of this letter than a government in the west, where letters and petitions and appeals and the like are always flying about, and politicians grown inured to them.

"My hope is that the government of Sheikh Hasina might actually be mortified by this letter."
Continue FREE with Ads Pay Rs. 1 to Read Without Ads
READ MORE IN:
Amitav Ghosh Salman Rushdie Books
Next Story : BJP Committed to Revoke Article 370: Rathore
Download the Outlook ​Magazines App. Six magazines, wherever you go! Play Store and App Store