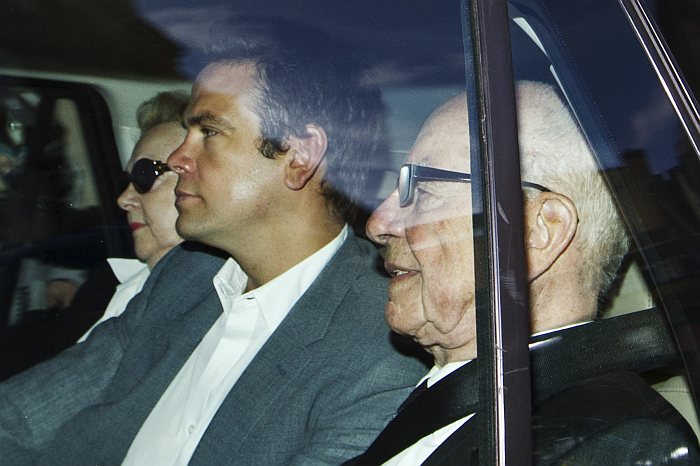 Rupert Murdoch's sons James and Lachlan are set to play a key role in his media-entertainment empire in a succession plan unveiled today.

Murdoch, an 84-year-old Australian-born US citizen, also has four daughters, for a total of six children from his three marriages.

Lachlan and James are both sons from Murdoch's marriage to journalist Anna Torv. The third child from that marriage, Elisabeth, sold her audio-visual production company Shine to her father's company.

James Murdoch, 42, is set to become chief executive at 21st Century Fox, the television and film group that includes Fox's Hollywood studios, Fox television and other assets around the globe. He will move up from the job of co-chief operating officer. He holds that title at News Corp, which is the publishing group created when Rupert Murdoch broke up his conglomerate.

James ran the Asian and European operations for his father's group and was thrust into the position of crisis management in the phone-hacking scandal that rocked the company in Britain.

In his youth, James was considered a rebel with earrings, baggy pants and platinum blond hair. Today he offers a clean-cut look with glasses and short hair and is married to an American with whom he has three children.

After dropping out of Harvard in 1995, James Murdoch created his own hip hop label, "Rawkus," which was bought by News Corp. In 1998.

He managed News Corp.'s musical division and later headed BSkyB, a satellite broadcaster in which the company had invested. His appointment at age 30 to head the British satellite television broadcaster made him the youngest chief executive in FTSE 100 history.

Lachlan Murdoch, 43, had been seen as the heir-apparent to his father's empire but abruptly left the group in 2005 when he had the job of deputy chief operating officer.

He returned to the fold in 2014 when his father created positions suggesting a key role in operations at both firms.

Lachlan, who steps into the role of co-executive chairman at Fox and holds the same post at News Corp, has managed several units within his father's company including the HarperCollins publishing group, Fox Television Stations and the New York Post.

Through his private investment firm Illyria, he also heads Nova Entertainment, which invests in media and telecom operations in Australia. A Princeton University graduate, he married Australian actress and model Sarah O'Hare with whom he has three children.