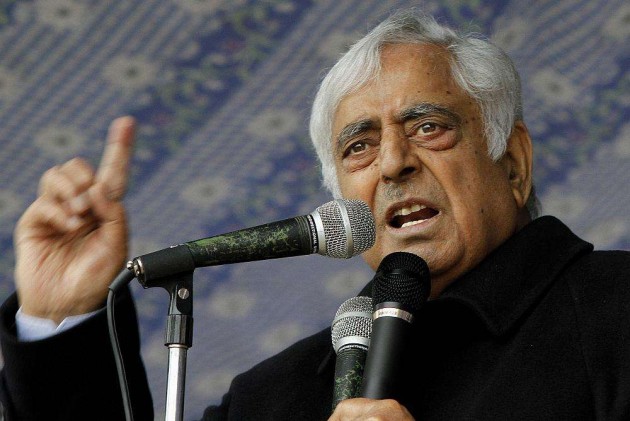 Opposition in Lok Sabha today lambasted Jammu and Kashmir Chief Minister Mufti Mohammed Sayeed for giving credit to Pakistan, Hurriyat and militants with the smooth conduct of elections in the state, forcing the government and the BJP to "fully disassociate" themselves with the controversial statement.

During Zero Hour, an angry Opposition also demanded a resolution to be adopted by the House condemning the statement of Sayeed at a press conference in Jammu yesterday, soon after he took oath of office and secrecy.

The furore saw Home Minister Rajnath Singh asserting that "the government and his party (BJP) fully disassociate" themselves from the remarks made by Sayeed.

Raising the issue, K C Venugopal (Cong) said "this is a serious issue" as he quoted Sayeed as saying that he had also had a word with Prime Minister Narendra Modi in this regard.

Venugopal said militants killed six village sarpanches and mounted suicide attacks on Army units. "This cannot be called creating a conducive atmosphere," he said, adding that the credit for smooth conduct of elections should be given to the people of the state, the Election Commission and security personnel.

"The Prime Minister's silence is shocking...The House should condemn it. We should pass a resolution," he said.

Home Minister Rajnath Singh said he wanted to make it clear that "the government and his party (BJP) fully disassociate themselves" from the remarks made by Sayeed.

Not impressed, the Opposition was on its feet demanding a statement by the Prime Minister.

Leader of Congress Mallikarjun Kharge said since the Prime Minister was told by Sayeed that he feels that the credit should go to Hurriyat, militants and Pakistan for smooth conduct of J&K assembly polls, Modi should make a statement. "Only PM can explain," he said.

At this, Rajnath Singh said he has spoken to the Prime Minister in this regard and was making the statement with his knowledge and consent.

Later he also made it clear that Sayeed had not spoken about this statement with the Prime Minister.

"For the smooth conduct of polls, I congratulate the people of J& K. I credit the EC, the Army and personnel of paramilitary forces...The people have to be credited for the large voter turnout," Singh said.

Not satisfied, the opposition staged a walkout demanding that a resolution condemning Sayeed's remarks be adopted in the House.

At one point when Kharge's microphone was put off as he was speaking, Samajwadi Party leader Mulayam Singh Yadav expressed his displeaure with the Speaker over the opposition leader not being allowed to have his say.

Kharge said if Sayeed had said the elections went off well due to the militants, he needed to be taught a lesson.

Opposition leaders wanted the resolution also to hail the efforts of the Army, paramilitary forces, Election Commission in conducting the free and fair polls and the participation of the people of Jammu and Kashmir in it.