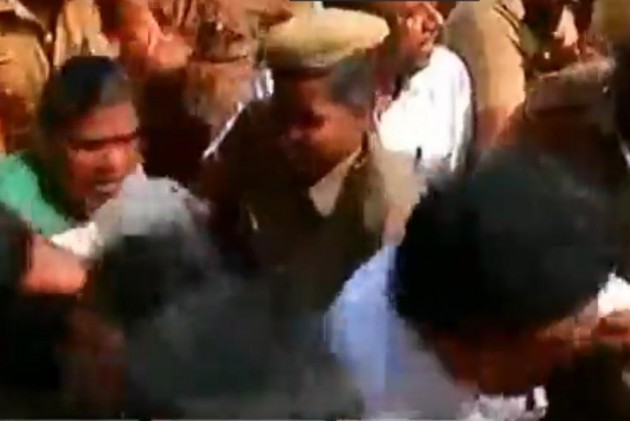 Amid a 'Sasikala for General Secretary' chorus in AIADMK, ruckus was witnessed outside the party headquarters here today where a man sustained injuries and was rescued by the police personnel deployed at the scene even as filmstar Anandraj resigned from the party.

Senior party leader and filmstar Anandraj quit the party in an apparent fallout with the close aide of late Chief Minister J Jayalalithaa.

Anandaraj said he had no personal enmity with anyone in AIADMK but regretted the 'misuse' of Jayalalithaa's name by some in the party and the government.

On the violence outside the AIADMK headquarters, the party spokesperson C R Saraswathy blamed expelled M P Sasikala Pushpa for being behind the incident in which a man, believed to be the latter's lawyer, was "thrashed" by a group of alleged AIADMK supporters, which left him bleeding.

AIADMK sources said that its workers started gathering at the party headquarters after there was some information that Sasikala Pushpa, earlier expelled by Jayalalithaa for anti-party activities, could come there ahead of tomorrow's General Council possibly to seek an invitation to attend it.

It was felt she could even try to contest for the top post.

Pushpa had been reportedly questioning Sasikala's eligibility for appointment as the new General Secretary, a demand being made by a section of party workers.

"Sasikala Pushpa wants to create a law and order problem ahead of the General Council tomorrow. Let her resign first as MP as it was Amma who made her the Rajya Sabha Member," Saraswathy said.

She alleged Pushpa's injured "lawyer" was deliberately stay put at the party headquarters despite being asked to leave and that it had been done to "create a problem".

"She (Pushpa) is no more in AIADMK. In the General Council, only members are allowed and not even special guests are invited," she said.

Sasikala Puspha could not be reached for comments.

Meanwhile, Anandraj said he has sent his resignation letter.

"I don't have any personal enmity with anyone. I was not invited for tomorrow's General Council. Let anybody be elected as General Secretary. I have sent my resignation letter, hope they accept it," he told reporters.

He had also been making some comments of late on the issue of Jayalalithaa's successor to the top post. (MORE) Without naming anyone, Anandraj said nobody should be

"In the present situation, even a government officer is using Amma's name," he said, in an apparent reference to former Chief Secretary P Rama Mohana Rao, who is under Income Tax scanner, and had frequently invoked her name yesterday while defending himself during a press meet.

"Don't demean the soul of Amma by invoking her name. Don't misuse her name. Anybody is able to use her name. Please respect her," he said.