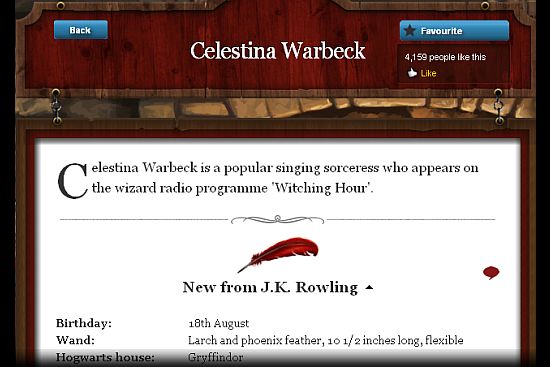 J.K. Rowling has posted new details about a minor character from her Harry Potter books on the fan website Pottermore.Com.

The author has written a short biography of Celestina Warbeck, a glamorous singing sorceress resembling Shirley Bassey and a favorite of Mrs. Weasley's.

The new backstory for the character, who was only mentioned briefly in the series about a boy wizard, was posted online today along with one of her songs, recorded by a singer at the Harry Potter theme park at Universal Orlando Resort in Florida.

Rowling calls her one of her favorite "offstage" characters in the whole series. She writes that Warbeck's special abilities include tap-dancing and an extraordinary voice that can "drown out a chorus of banshees.''