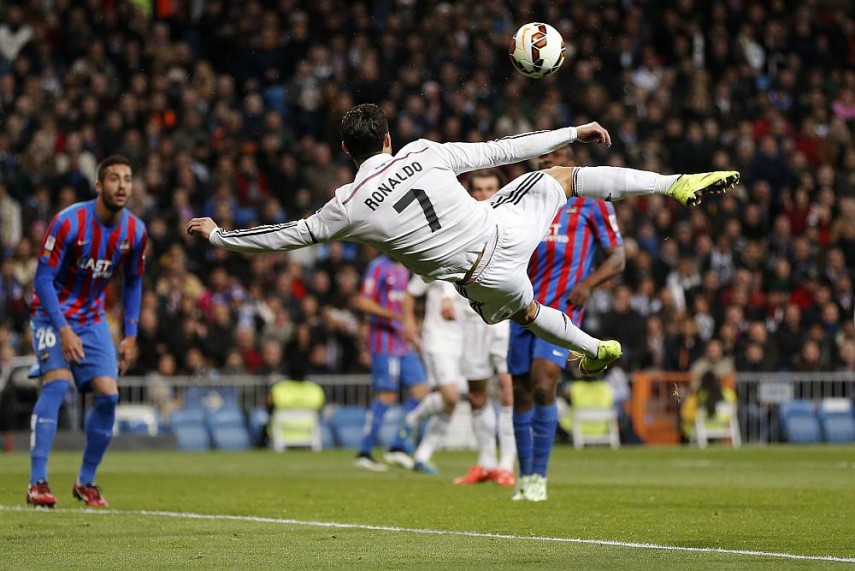 Ronaldo struck twice in just over a minute to bring Madrid level in the tie inside 17 minutes.

Yet, the 10-time winners were forced to wait until 13 minutes from time to find the winner when Ronaldo's dipping free-kick escaped the clutches of Diego Benaglio to find the bottom corner.

"We need him, he gives everything for the shirt. For a long time he has shown he is the number one and when he is on form you notice."

Madrid coach Zinedine Zidane hailed his side's collective effort, but reserved special praise for Ronaldo who became the first player to score three hat-tricks in the competition in one season.

"He is showing what he is, which is the best player in the world," said the Frenchman.

"Cristiano needs the whole team, I want to speak about the team because they achieved this together.

"But he is special because not everyone is capable of scoring three goals."

Wolfsburg boss Dieter Hecking was left to rue his side's inability to defend from set-pieces and lack of a killer away goal.

"We should have defended better. To go to the next stage, we needed a goal," he said.

"Two of the three goals were from dead balls and so that tells you that we didn't defend right."

Madrid hadn't overturned a first-leg deficit in the Champions League in eight attempts stretching back 14 years to when Zidane played for Los Blancos in a quarter-final win over Bayern Munich.

However, they roared back into the tie and were level as Ronaldo struck twice in 86 seconds.

Dani Carvajal replaced the much-criticised Danilo in Madrid's only change from the first leg at right-back and the Spanish international's deflected cross fell perfectly for Ronaldo to tap home the opener at the back post.

The two nearly combined for the second straight from the restart as another dangerous Carvajal effort was just cut out before Ronaldo could head home.

However, there was no stopping the three-time World Player of the Year from the resulting corner as his downward header found the bottom corner of the net.

Wolfsburg's disastrous start was compounded when star midfielder Julian Draxler limped off injured to be replaced by Max Kruse just after the half-hour mark.

Yet, the Germans still managed to grow into the game as the opening 45 minutes wore on.

Luis Gustavo's fierce long-range effort forced Keylor Navas into a decent save before Bruno Henrique squandered a huge chance to net the vital away goal as he hesitated in getting his shot off and Marcelo got back to block the ball behind.

Madrid started on the front foot again at the start of the second half as Ronaldo saw a free-kick deflected wide before Benaglio was forced into a save to prevent Josuha Guilavogui turning a cross into his own net.

The hosts were convinced they had gone ahead for the first time in the tie when Ramos's header came off the inside of the post and rolled along the goal line, but Hungarian referee Viktor Kassai adjudged the ball hadn't crossed the line.

Ronaldo finally struck the decisive blow when his free-kick from 25 yards skidded off the wet turf and beyond the despairing dive of Benaglio to seal his 37th hat-trick for Madrid and 16th Champions League goal of the season.

The Swiss 'keeper then kept Wolfsburg in the tie with brilliant saves from Karim Benzema and Jese Rodriguez to set up a grandstand finish.

But Madrid's experience told in the dying stages as they comfortably saw the game out to match Barcelona's record run of six semi-finals between 2008 and 2013.