Role Of Karnataka Minister's Aide To Be Probe In Dhinakaran Case 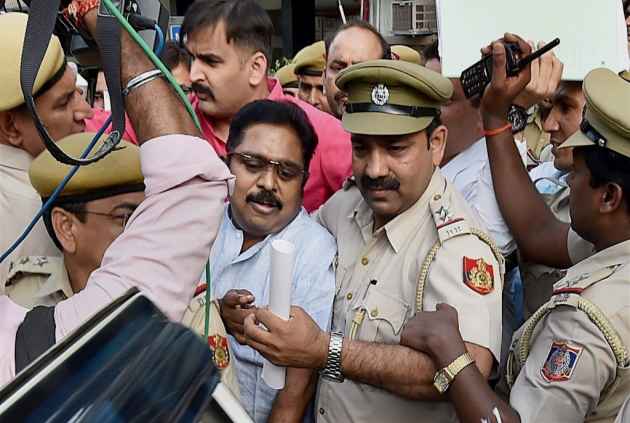 Print
A
A
A
increase text size
Outlook May 17, 2017 10:04 IST Role Of Karnataka Minister's Aide To Be Probe In Dhinakaran Case

The Delhi Police will probe the role of a purported aide of Karnataka's home minister in connection with an alleged attempt by AIADMK (Amma) leader T T V Dhinakaran to bribe Election Commission officials.

The Crime Branch probing the case had issued a lookout notice for V C Prakash who was the deputy chairman of the NRI Forum Karnataka.

Sources claim that Prakash is a close aide of G Parameshwar who is home minister in the Karnataka government.

Prakash is also a friend of Mallikarjuna who was arrested along with Dhinakaran on April 25. It is suspected that Prakash had helped Mallikarjuna in the money transfer through hawala route, police said.

He has already been questioned once and is likely to be grilled again on Friday.

"It was suspected that he might escape from here and that is why a lookout notice was issued. His statement has been recorded once and he will be questioned again this week," said the officer.

Dhinakaran was arrested here on the night of April 25 after four days of questioning for allegedly attempting to bribe an unidentified EC official to get the undivided AIADMK's 'two leaves' election symbol for his faction for a by-election to the R K Nagar Assembly seat in Tamil Nadu which was later cancelled by the Election Commission.

His name had surfaced after police arrested an alleged middleman Sukesh Chandrasekar who had allegedly told Dhinakaran that he had contacts in the EC and would help his faction get the election symbol.