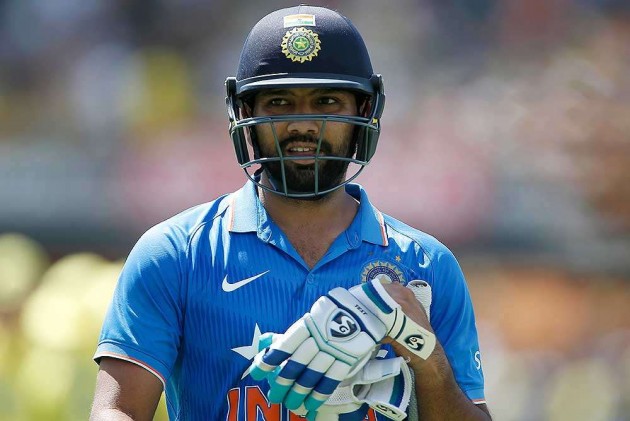 Rohit Sharma's second successive century was once again overshadowed by Australia's collective batting might as the hosts continued their dominance over Indian bowlers to notch up a seven-wicket victory in the second cricket one-dayer and take a 2-0 series lead here today.

Sharma, who was adjudged the Man of the Match, stood out for a second consecutive game with a 127-ball 124, which was the cornerstone of India's 308/9, a score that could easily have been more if not for a late collapse.

With 11 fours and three sixes, Sharma was the outstanding performer -- Ajinkya Rahane (89) and skipper Virat Kohli (59) being the other notable contributors. This was Sharma's 10th ODI hundred.

However, the Australians never looked in trouble as they easily chased down the steep target with an over to spare, exposing India's bowling frailties.

Openers Aaron Finch (71) and Shaun Marsh (71) laid the foundation before George Bailey (76 not out) and Steve Smith (46) snatched the game from India for a second time in three days.

The Indian bowlers were disappointing to say the least and never managed to threaten the Aussies, who scored at will and paced their chase to perfection yet again.

Ishant Sharma (1-60), playing an ODI after 354 days, was especially wayward and undid all the good work done by his new-ball partner Barinder Sran (0-51). Ishant was also guilty of dropping Marsh early in his innings.

En route the victory, Australia completed the highest- ever run-chase in Brisbane, beating their own previous record of 301/9 achieved against England in January 2014.

This was after Indian skipper MS Dhoni once again won the toss and elected to bat. The visitors made a solitary change to their eleven, bringing in Ishant for Bhuvneshwar Kumar.

Australia made three changes to their line-up from the opening ODI in Perth, with Shaun Marsh coming in for David Warner, while John Hastings and Kane Richardson came in for the rested Mitchell Marsh and Josh Hazlewood.

The two teams will now travel to Melbourne for the crucial third match to be held on Sunday.

The ease with which the Aussies chased a huge target was once again a masterclass in handling pressure.

Marsh (71 runs, 84 balls, 5 fours) and Finch (71 runs, 81 balls, 7 fours 1 six) started cautiously, but the run-rate was helped by a number of extra deliveries bowled by the Indian pacers.

They seemed to get some purchase off the pitch, putting a squeeze on the run flow. It prompted Marsh to go for a big shot in the 13th over, off Jadeja, but Ishant dropped a sitter at long on. Marsh was on 19 at that time and would go on to enjoy three more botched attempts in the field.

The two had cut loose with a flurry of boundaries at that moment, and yet India could have applied the brakes. But Ashwin had failed to collect a throw from Umesh Yadav (1-74) in the deep, in the 21st over itself, and a run-out chance went begging.

Finally the 145-run opening stand was broken in the 30th over with Rahane taking a sharp low catch in the deep as Finch looked to hit out against Jadeja.

Marsh then got his third life when Sran made a diving effort in the deep in the 24th over but dropped the ball after taking a two-handed catch while leaping.

Four overs later, Manish Pandey dropped one at wide slip, this time off Ishant. Marsh was on 69 at that moment and Australia had already crossed the 150-mark.

He finally departed in the 30th over, miscuing one off Ishant, giving some hope to the Indian cause. But Smith and Bailey put on a 78-run stand for the third wicket to dash any hopes for the visitors.

Yadav bowled the former in the 41st over and thereafter Australia still needed 65 runs off 55 balls, but they were never really under any pressure. Bailey reached his 18th ODI fifty in the 44th over as he and Glenn Maxwell (26 not out, 25 balls, 1 fours) added the requisite number of runs without much fuss.