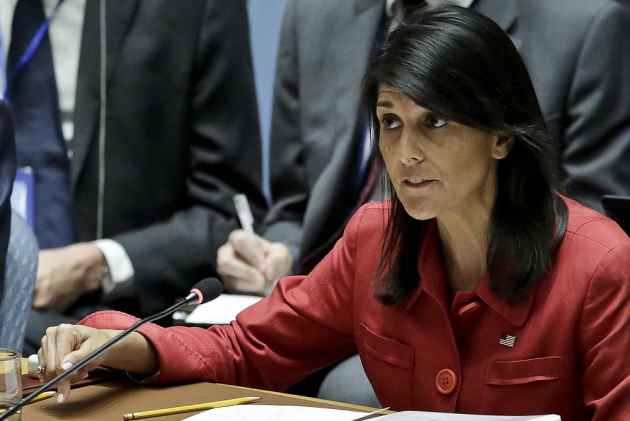 In view of Myanmar denying entry to a United Nations fact finding team, US Ambassador to the UN Nikki Haley has said that the international community cannot overlook the situation there.

She said that Myanmar should let the UN fact-finding mission to probe the alleged human rights violations by the country's military and security forces.

Myanmar said late last month that it would not grant visas to members of a commission appointed by the UN Human Rights Council to investigate human rights violations by the country's state security forces, including the recent abuses in Rakhine State.

The US mission to the UN said violence in Rakhine State against ethnic and religious communities continues to claim lives and there are allegations of sexual violence against women and children.

"No one should face discrimination or violence because of their ethnic background or religious beliefs. It is important that the Myanmar government allow this fact-finding mission to do its job," Indian-origin Haley said in a statement here.

She said the international community cannot overlook what is happening in Myanmar and "we must stand together and call on the government to fully cooperate with this fact-finding mission".

"The total number of victims will be unknown unless the fact-finding mission is allowed to proceed," the UN mission said.

Geneva director at global rights group Human Rights Watch John Fisher said denying visas to the members of the fact-finding mission would be "a slap in the face" to victims who suffered grave human rights violations by Myanmar's state security forces.

"Does Aung San Suu Kyi's government really want to be included in a very small and ignominious club of countries that reject Human Rights Council decisions? North Korea, Eritrea, Syria, and Burundi are human rights pariah states that obstructed the work of independent, international investigations into alleged rights abuses, and it would be a travesty for a democratically elected, National League for Democracy-led government in Myanmar to do the same," Fisher said.

The rights group said the Myanmar government should immediately announce they will issue visas to the fact-finding mission and fully cooperate with its investigation.

"Otherwise, the governments that pushed to set up this fact-finding mission need to stand up for it and impose a political consequence on Myanmar for blocking its work," Fisher added.

The UN estimates that more than 90,000 Rohingya have been forced to flee their homes in northern Rakhine State since last October.