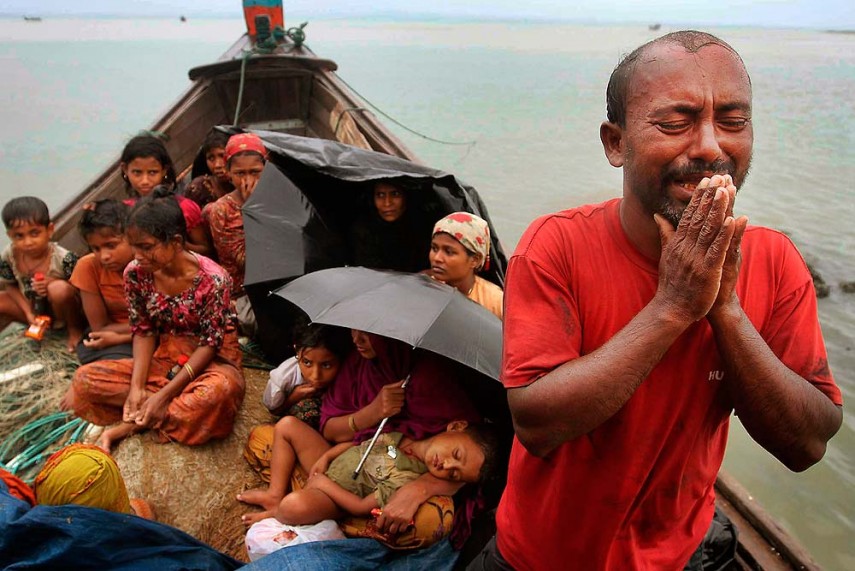 Multiple boats packed with Rohingya refugees fleeing violence in Myanmar were turned back by Bangladesh border guards today, despite appeals by the country's opposition to provide shelter to the persecuted Muslim minority.

Thousands of desperate Rohingya from Myanmar's western Rakhine state have flooded over the border into Bangladesh in the last week, bringing with them horrifying claims of gang rape, torture and murder at the hands of Myanmar's security forces.

Eight boats attempting to cross the Naf River separating Rakhine from southern Bangladesh were pushed back on Monday after six were refused entry on Sunday, head of the board guards in the Bangladeshi frontier town of Teknaf, Colonel Abuzar Al Zahid, told AFP.

Dhaka says thousands more are massed on the border, but has refused urgent international appeals to let them in, instead calling on Myanmar to do more to stop people fleeing.

In the past two weeks, Bangladeshi border guards have prevented more than 1,000 Rohingya, including many women and children, from entering the country by boat, officials told AFP.

Bangladesh's main opposition leader Khaleda Zia late Sunday joined a growing chorus of political parties and hardline Islamist groups in the Muslim majority country calling for the Rohingya to be given shelter.

At least 30,000 have been internally displaced in Rakhine and many have tried to reach Bangladesh over the last month despite heightened border patrols, and sought refugee amongst the Rohingya refugee population that already live on the Bangladesh side.

Samira Akhter told AFP by phone that she reached an unofficial refugee camp in Bangladesh on Monday, after fleeing her village in Rakhine state with her three children and 49 others.

"The military killed my husband and torched our home. I fled to a hill along with my three children and neighbours. We hid there for a week," said Akhter, 27.

Dudu Mia, a Rohingya leader in the camp, said at least 1,338 had arrived in the community since mid October.

Violence in Rakhine -- home to the stateless ethnic group loathed by many of Myanmar's Buddhist majority -- has surged in the last month after security forces poured into the area following a series of attacks on police posts blamed on local militants.

A UN official said last week Myanmar is engaged in "ethnic cleansing" of Rohingya Muslims, as reports emerged of troops shooting at villagers as they tried to flee.