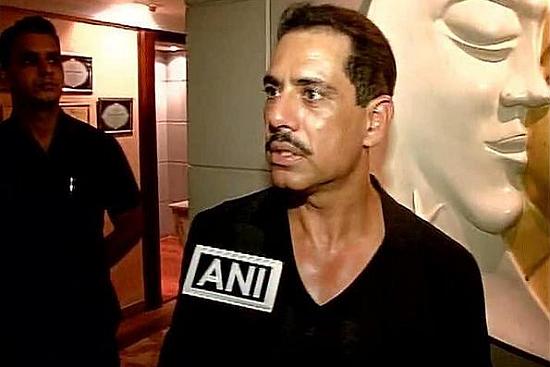 Congress President Sonia Gandhi's son-in-law Robert Vadra today lost his cool and angrily pushed the microphone of a reporter away when he was quizzed about his controversial land deals in Haryana.

A livid Vadra was seen on a video footage shown on TV channels asking the reporter four times as to whether he was serious about his land deal question.

Vadra had earlier anwsered a couple of questions posed by a reporter inside Ashoka Hotel.

The reporter was seeking Vadra's reaction to the decision of the new BJP government in Haryana to investigate all land deals whether it involves Vadra or the former Chief Chief Minister Bhupinder Singh Hooda or anyone else.

Vadra was also heard saying, "put your camera off".

"Are you nuts?. What is wrong with you?" he said from a distance as he was led away by his security guards.

At this stage, the reporter was heard saying that his question was legitimate.

To this, Vadra responded asking whether the reporter was the right person to whom the questions on the land deals should be anwsered.

"It was a private event and media was not supposed to be there. Thought that it was the private internal photographer asking questions and not ANI."

However, it is very clear from the video that the microphone in the hands of the reporter is clearly marked ANI.

"Are you serious, are you serious?" Robert Vadra to ANI reporter when question was asked about his land deals

Robert Vadra pushed ANI mike away when asked on his land deals, his PSOs got into a scuffle with ANI reporter & cameraman soon after

Robert Vadra's PSOs get into a scuffle with ANI reporter & cameraman after question was asked on Vadra's land deals pic.twitter.com/4giqbVJf09

Robert Vadra pushes ANI mike away when asked on his land deals pic.twitter.com/Zyd4JWnYoy

Continue FREE with Ads Pay Rs. 1 to Read Without Ads
READ MORE IN:
Robert Vadra National
Next Story : Memorial for 1984 Anti-Sikh Riot Victims to Come Up in Delhi
Download the Outlook ​Magazines App. Six magazines, wherever you go! Play Store and App Store